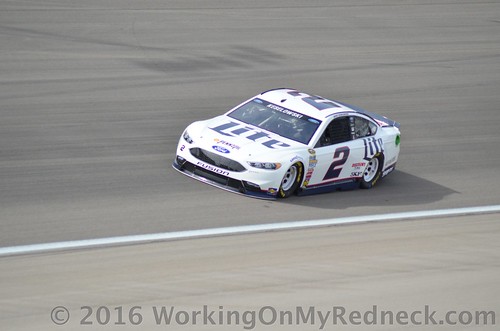 Recap: Brad Keselowski and the No. 2 Miller Lite Ford team showed they have the speed necessary to compete for the win in Sunday’s Daytona 500 as they led the most laps and finished fourth in the first Can-Am Duel at Daytona on Thursday night. The 2012 Monster Energy NASCAR Cup Series champion began the race from the second position, but quickly moved around Chase Elliott for the top spot on the first lap. Keselowski would lead until lap 25 – just before the competition caution – when Kyle Busch made his way around him before the yellow flag waved. After a four-tire stop that included air pressure and wedge adjustments, Keselowski restarted the race in the second position. Again, he would quickly move to the front of the field and would lead until lap 37. After being shuffled towards the back of the top five, Keselowski began working with Ford Performance teammates Kevin Harvick and Aric Almirola to try and mount a charge to the front before crossing the finish line in the fourth position. The Miller Lite Ford team will start the 59th running of the Daytona 500 from the seventh position on Sunday, while securing seven regular season bonus points with the finish in the Duel.

Recap: Joey Logano started ninth and finished ninth with the Shell-Pennzoil Ford Fusion in Thursday night’s first Duel at Daytona. Logano worked his way inside the top-five early in the event before being forced to pit at lap 12 for a loose right front wheel. When he rejoined the field, Logano ran with teammate Brad Keselowski until the competition caution at lap 25. Crew chief Todd Gordon brought the Shell-Pennzoil Ford down pit road for a four-tire stop, with wedge adjustments to help the handling for Logano in the run to the finish. After restarting 21st, Logano picked up 10 positions on the opening Logano again worked his way to the top-five, avoiding a near collision on the backstretch. On the final restart, Logano battled with the leaders before getting shuffled out of line. Logano was able to climb his way back to ninth place. The team’s finish earned them the 17th starting position for Sunday afternoon’s 59th running of the Daytona 500, and two regular season championship points.

Quote:  “I was just talking with Todd (Gordon) and trying to figure out where our mistakes were tonight. I made a few on the racetrack. I was up there toward the front and made a move and lost everything I had gained. That one sucked on my part. We also had a loose wheel and need to understand why we had that. We had a couple of mistakes we need to clean up. Besides that, we learned some stuff tonight. We had a pretty good car and to not get a good finish out of it was my fault. But I feel comfortable about the 500. This was a night race, nothing like what the race will be like on Sunday when cars are slipping and sliding a lot more. That is when we will be better.”