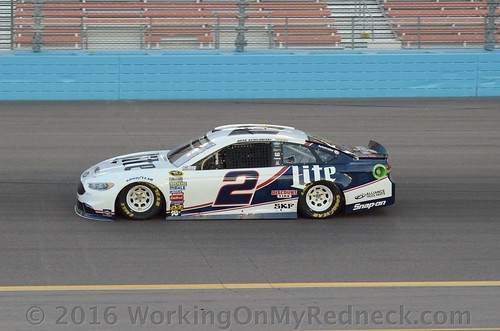 “The No. 22 Fitzgerald Mustang looked great on the track last season and we can’t wait for our employees to see our colors in the Monster Energy NASCAR Cup Series and NASCAR Camping World Truck Series too,” said Fitzgerald founder Tommy Fitzgerald Sr. “Team Penske does everything top notch and their drivers are among the best in the sport, so we are confident that we will have continued success.”

Under the expanded relationship, Fitzgerald will become the primary sponsor of the No. 2 MENCS Ford Fusion, driven by Brad Keselowski, in the spring race at Talladega Superspeedway and the fall race at Richmond International Raceway. The Fitzgerald name will also adorn the No. 19 Ford F-150 driven by Austin Cindric for Brad Keselowski Racing in a NCWTS race to be determined at a later date this season.

Team Penske welcomed Fitzgerald to its family of partners in 2016 as the company sponsored the No. 22 NXS Ford Mustang driven by Joey Logano, Ryan Blaney and Keselowski for four races last season. The Tennessee-based company will again sponsor the former championship-winning Ford for three races in 2017.

“The Fitzgerald relationship continues to be a terrific one for Team Penske,” said Roger Penske. “They are a first-class company and we are proud to see them grow with our race team. It is a true partnership, right down to the Fitzgerald glider that transports the No. 22 NASCAR XFINITY Series team around the country.”

The 2017 Monster Energy NASCAR Cup Series season begins in February with the running of the Daytona 500 on February 26. The NASCAR XFINITY Series also begins at Daytona on February 25, while the NASCAR Camping World Truck Series starts its season on February 25th at the 2.5-mile superspeedway.

Team Penske is one of the most successful teams in the history of professional sports and celebrated its 50th Anniversary in 2016. Cars owned and prepared by Team Penske have produced more than 440 major race wins, over 500 pole positions and 29 National Championships across open-wheel, stock car and sports car racing competition. In its storied history, the team has also earned 16 Indianapolis 500 victories, two Daytona 500 Championships, a Formula 1 win and overall victories in the 24 Hours of Daytona and the 12 Hours of Sebring. Team Penske currently competes in the Verizon IndyCar Series, the Monster Energy NASCAR Cup Series and NASCAR XFINITY Series. The team also races in the Virgin Australia Supercars Championship, in a partnership with Dick Johnson Racing, as DJR Team Penske. For more information about Team Penske, please visit www.teampenske.com.