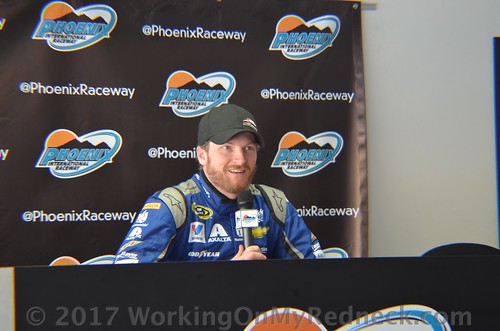 Dale Earnhardt Jr. shocked the world at media day when he said he will consider retirement … if he wins the 2017 NASCAR Cup title.

Now remember that Dale Jr. has never won a championship, and while he isn’t considered a favorite to win the title — he wasn’t running well enough to win it at the time he stepped out of the car last year and missed the final 18 races because of a concussion — it certainly can’t be ruled out with NASCAR’s “enhanced” and unique playoff system.

“If I won the championship this year, it’d be hard not to call it a career,” he said on SportsCenter during media day for the Daytona 500. “I don’t know why else I would come back to race other than for the fans. I would have done everything that I have wanted to accomplish, so I’d have to find different means of motivation to come back. I’m sure I could find it.

“We got great fans out there that would love to see us continue to race. They hate whenever we mention the ‘retirement’ word. It’d be hard to make that decision, but it’d be tough not to consider. Going out on top is the best way to do it.”

Earnhardt, in talking to reporters during media day, said winning a championship “would be the icing on the cake of my career.”

Here’s the only problem with the plan: Earnhardt’s contract is up at the end of this season, and any extension likely would be signed well before he wins the championship. Earnhardt, 42, has 26 career Cup victories, including two Daytona 500 wins.

“I would definitely not want to come back and try to race anymore if I won a championship,” Earnhardt said. “I’d be out of here. … I would like to race more, but if I win the championship, I would have to consider going out on top.

“It really depends on a lot of different things. I said that a little tongue-in-cheek yesterday. But I’d definitely consider it. That’s the last box that I don’t have checked.”

This puts a whole other light on the what Dale Jr’s fans may want for him!  They may decide that they really do not want him to win the championship.  If he doesn’t win the 2017 championship, then he most assuredly would return to drive for a more years with HMS.  However, winning the hardware for 2017 would most definitely mean he would pull the plug on his driving career and thus leave them hanging!