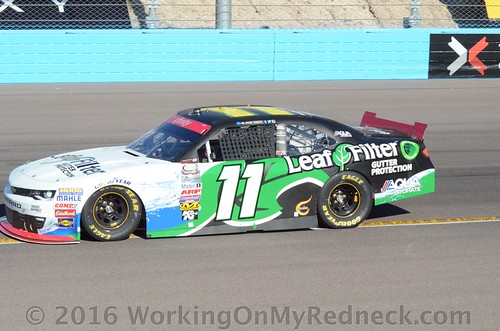 Blake Koch has nine previous starts in the NASCAR XFINITY Series (NXS) at Daytona International Speedway (DIS) with his best start and finish (ninth-place) at DIS coming a year ago in this event. The last time the NXS visited DIS, Koch finished 22nd after starting 16th and getting collected in a multi-car incident in the closing laps of the race.

2016 Season in Review… Koch wrapped up the 2016 season seventh in the NXS championship standings after accumulating five top-10 finishes, leading 16 laps and making the inaugural NXS playoffs. In Kaulig Racing’s first year of competition, the team narrowly missed advancing to the final round of the playoffs.

Experience on the Box… Veteran Crew Chief and Kaulig Racing General Manager Chris Rice returns atop the pit box to call the shots for the No. 11 LeafFilter Gutter Protection team in 2017. Rice’s career as a crew chief includes over 250 NXS races spanning over 14 seasons, with one win in 2003.

Blake Koch NXS Career… While the West Palm Beach, Fla. native may be starting his sophomore season with Kaulig Racing, Koch is no stranger to the NASCAR XFINITY Series. After coming off a career-best championship finish of seventh in 2016, Koch makes his 181st NXS start this weekend. To date, Koch has a career-best starting position of second at Homestead-Miami Speedway (Nov. 2013), and a career-best finish of eighth at Richmond International Raceway (April 2016), Bristol Motor Speedway (August 2016) and Phoenix International Raceway (November 2016).

Tune-In… The NXS Powershares QQQ 300 from DIS will be televised live Saturday, February 25th, 2017 at 3:30 p.m. ET on FS1 and will be broadcasted live on the Motor Racing Network (MRN) and SiriusXM NASCAR Radio channel 90.

Meet Blake… Koch will make several public appearances during the Powershares QQQ 300 weekend at DIS. First, Koch will participate in a Q&A session in the UNOH FanZone at DIS on Friday, February 24th at 4:00 p.m. ET. Tickets for the UNOH FanZone can be purchased here.

On Saturday, February 25th at 1:30 p.m. ET, Koch will appear at the Team Chevy stage in the DIS midway followed by an appearance at the XFINITY Zone at 1:45 p.m. ET.

About LeafFilter®
Since 2005, LeafFilter® has revolutionized the gutter protection industry. The company is proud to have grown from one small office in Hudson, Ohio to one of the largest home improvement companies in the nation and a leading choice in gutter systems. Once installed on a homeowner’s existing gutters, LeafFilter®  Gutter Protection eliminates gutter cleaning for life. The micro-mesh filter is 50 microns fine – so not even sand can get through. With more than 30 million feet of gutter guards installed on homes across America, LeafFilter® has the knowledge and expertise to guarantee that nothing but water will get into your gutters. To learn more about LeafFilter®, visit:  LeafFilter.com .