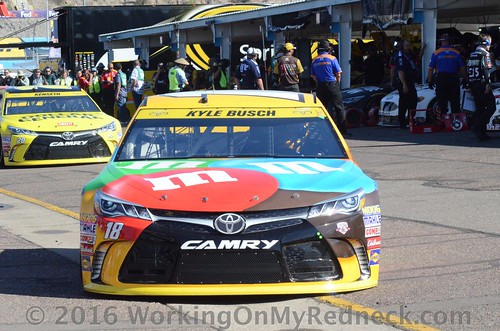 This year Mars is rolling out what likely is its largest launch ever for a new kind of M&M’s with M&M’s Caramel, and the company will support the roll-out with a major push in NASCAR, and M&M’s will start selling the Caramel product in May. Part of that roll out will be in NASCAR, where the M&M’s Caramel brand will run as the primary paint scheme of Kyle Busch’s #18 Joe Gibbs Racing Toyota for a third of the season’s 36 races.

Due to the spring release of the candy, M&M’s will hold off on running its first Caramel paint scheme until the Monster Energy NASCAR Cup Series All-Star Race in Charlotte. M&M’s will support the launch with TV, digital, social and in-store activation, as well as shoot a digital content series with Busch about “unsquaring” caramel. Additionally, M&M’s is looking at having at-track activation on midway fanzones, and will have a non-Caramel display to start the season at the Daytona 500.

Mars, which sponsors around 30 races a year with JGR in a deal worth eight figures annually and has been involved in NASCAR for more than 25 years, renewed its official deal with the sanctioning body last year through 2019.