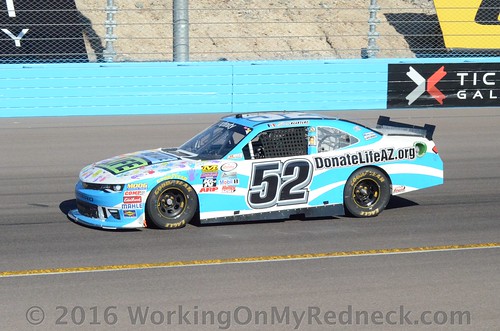 Several weeks after announcing a multi-race deal to compete in the Monster Energy NASCAR Cup Series, Joey Gase revealed to Fronstretch he will be returning to full-time competition in the NASCAR XFINITY Series.

The 24-year-old will be back for his fourth straight season driving Jimmy Means Racing’s No. 52 car on a full-time basis.

“I’ll be back full-time in the XFINITY Series,” Gase said. “We’re trying to expand, but the competition level is rising. Stewart-Haas [Racing] is coming in and GMS Racing. RCR and JR Motorsports are adding teams, so we are going to have to get better if we want to survive in this sport.”

BK Racing announced in January that the Toyota-backed program will field an entry for Gase in a limited Cup Series schedule in 2017, including a locked-in spot in the Daytona 500. Gase will pilot the No. 23 car in the Daytona 500, and Gray Gaulding will fill the remainder of the season.  Gase will be behind the steering wheel at Kentucky Speedway in July and Bristol Motor Speedway in August as well.

“I started talks with Ron [Devine, team owner] at the end of the season last year,” Gase said. “I told him what I would like to do. I had some good success on the XFINITY side at the superspeedways. I met with the folks at Best Home Furnishings last year at the Daytona 500. We started to talk, and one thing led to another and I got them as a sponsor.

“I told Ron what we all had in mind and he wanted me to come on board. Here we are now. It is something I am really excited about. Ron has given many chances to a lot of talent coming up, such as Alex Bowman, Ryan Truex and Matt DiBenedetto. I’m really looking forward to the opportunity to see what we can do.”