Schatz, the eight-time and reigning World of Outlaws (WoO) Craftsman Sprint Car Series champion, led a star-studded field into action Thursday night and executed a thrilling final-lap pass aboard the TSR No. 15 Arctic Cat/Ford Performance/Curb J&J to pick up his first triumph of the season. The Fargo, North Dakota racer made it two straight Friday with a late-race surge into the lead, but his bid for a weekend sweep Saturday night came up just short when he lost the lead late in the race. 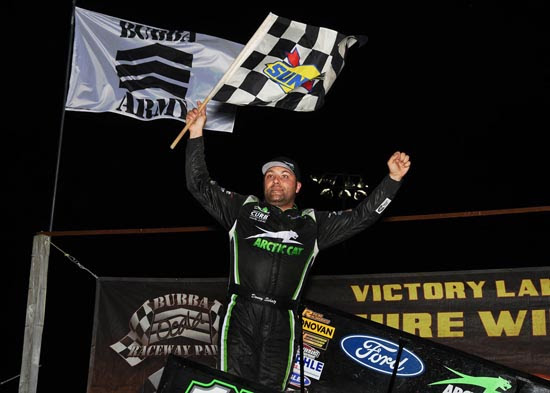 “It was a terrific start to our season and we’re thrilled to get Arctic Cat and Ford Performance wins right out of the box,” said Schatz. “It’s a testament to the entire TSR organization to come down here and have these kind of results. From the moment we ended last year in Charlotte, the focus has been on getting things ready for 2017. From working with the people at Arctic Cat and Ford to all of manufacturers…everyone worked hard so when we got on the track for the first time Mondaynight testing we were moving forward. My guys – Rick Warner, Steve Swenson and Brad Mariscotti – are motivated to continue to finding ways to make me faster. We had a plan this weekend and we almost completed our goal. Hats off to the All-Stars and Bubba and his staff for putting on three good nights of racing. There were a lot of good cars here this weekend and to come home with two wins and a second is something to build on. Of course, you win those first two nights and you want to leave with three trophies. The good news is we have another race on Wednesday.”

After spending the past three months transitioning from the 2016 season to the 2017 campaign, Schatz and his TSR team hit the track running in Thursday night’s opener. Schatz was the 22nd car in the field of 38 to circle the 3/8-mile dirt track and posted the second-fastest qualifying lap. He raced from fourth to second in the eight-lap heat race and reached the back bumper of eventual winner Kerry Madsen coming to the checkered flag. He started fourth and finished in the same position in the first of two dash events that set the first 10 starting positions in the 30-lap A-Main. The finish earned Schatz the seventh-starting spot in the main and during the early going, Schatz searched the track high and low looking for the fastest line. Madsen took command of the race early while Schatz found his way into the top-three midway through. While Madsen was trying to fend off Tim Shaffer’s bid to take over the top spot, Schatz climbed his way into the fray setting up a three-car battle for the win. As the leaders worked their way through traffic late, it was still anyone’s race. Madsen’s chances for the win expired when his right rear tire blew heading into turn three on lap 28. Shaffer assumed the lead and took the white flag, but Schatz zeroed in on the leader heading into turn one on the final circuit. Schatz came out of turn two with a head of steam and passed Shaffer for the lead down the backstretch and beat him back to the finish line to score the victory. It was his third career win at Bubba Raceway Park.

With his first victory of the season in the books, Schatz and his TSR crew returned Friday for another full night of competition. A late qualifying draw put Schatz in the fourth group and he would be the 34th of 38 cars to make a qualifying run. For the second straight night, Schatz turned the second-fastest qualifying lap to put him in the fourth-starting spot in his heat race. He finished third in heat four and transferred to the dash where he advanced from fourth to second in the four-lap contest. In the feature, Schatz quickly worked his way in front of third-starting Madsen while Shaffer set the pace with Joey Saldana in pursuit. On lap two, Schatz passed Saldana for second and set his sights on Shaffer. He tried several lines and closed on Shaffer multiple times. The two traded slide jobs in turns three and four on lap 24 and on the following lap, Schatz took the top spot for good and drove off to take his second consecutive win and 15th career ASCoC triumph. 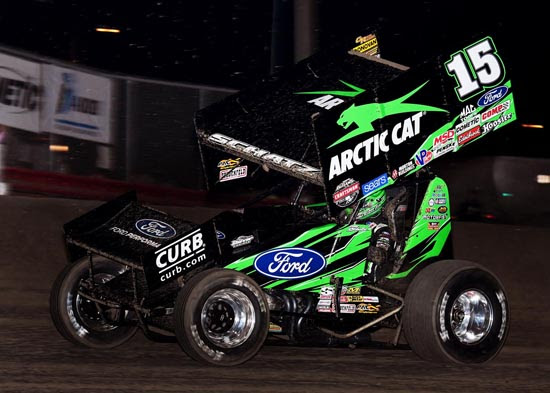 Following wins in the first two nights, the challenge was to complete the weekend sweep by coming out on top in Saturday’s30-lap finale. The run for three straight started with Schatz going out ninth overall in the 37-car field. His time would land him on the pole of the opening heat and he took full advantage leading all eight circuits to advance to the dash. He raced from third to first in the four-lap dash to earn the pole position for the main event. Schatz led the field to take the green and jumped out to a commanding lead before Rico Abreu brought out a caution on lap three after contacting the outside retaining wall. On the restart, Schatz resumed his torrid pace. With 20 laps in the books, Schatz had built a one-second lead over Madsen and continued working his way through traffic. Two laps later, Madsen pulled to the back bumper of Schatz, who was feverishly trying to clear lapped cars. On lap 24, Madsen was able to get under Schatz in turn one and take over the top spot. Schatz pressured him the final five laps, but couldn’t retake the top spot and finished second.

The attention of the TSR team now turns to the 46th annual DIRTcar Nationals at Voluisa Speedway Park in Barberville, Florida, which begins Wednesday. Two complete ASCoC shows will be contestedWednesday and Thursday evening before Friday’s season opener of the 40th season of World of Outlaws (WoO) Craftsman Sprint Car Series. WoO events on Saturday and Sunday will conclude the five-race week. It marks the 13th consecutive season for the Outlaws to begin at the half-mile dirt oval located 20 miles west of Daytona Beach. Schatz will look to start his quest for a ninth WoO title the same way he capped last year’s championship in victory lane. In each of the last three DIRTcar Nationals, Schatz has won a WoO feature event at Voluisa and leads all drivers with eighth career WoO wins at the track.