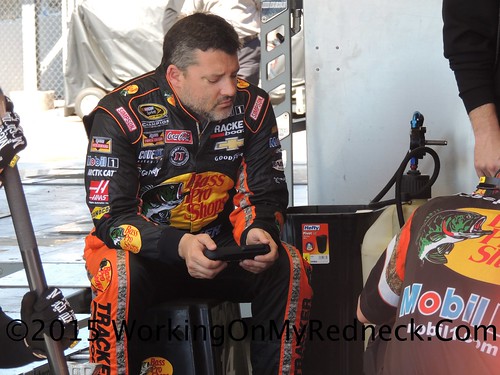 This week Tony Stewart has returned to sprint car racing, though his first race back provided him more frustration than frivolity.

Stewart finished a disappointing 17th in the 26-car main event late Thursday at Bubba Raceway Park.  Just as side note, Smoke ended the night arguing with a fellow driver!

Stewart was driving a sprint car for the first time since he accidentally struck and killed Kevin Ward Jr. during a race in upstate New York in 2014. Stewart is still facing a wrongful death lawsuit filed by the Ward family.

The three-time NASCAR champion, who retired after last season, declined comment after the dirt-track event out of respect for the Ward family and later told The Associated Press he didn’t want to comment out of respect to the Wards.

He plans to keep a low profile during the event, racing again Friday and Saturday at the three-eighths mile track.

Sprint car racing is Stewart’s passion and how he plans to spend much of his retirement. He owns the Arctic Cat All Star Circuit of Champions series, which opened its season Thursday night in Ocala. Given his status and star power, Stewart had the best spot in the pits, just a few steps from the track.

There were barricades alongside his stall, a little something extra to keep the near-capacity crowd a few feet away. Stewart declined photo and autograph requests between breaks, telling those who asked that he would do it all after the finale.

It capped what surely had been a long day for Stewart, who arrived in Ocala early in the week and then flew up and back to Detroit early Thursday to join Stewart-Haas Racing drivers Clint Bowyer, Kurt Busch, Kevin Harvick and Danica Patrick for a Ford event that included a tour of the Henry Ford Museum of American Innovation.

Stewart’s crew in Ocala included his dad, his girlfriend and his dog.

Although he started his heat race from the pole, he faded to sixth, failed to qualify for the A Main and then slammed his helmet on a table in his hauler. He eventually managed to race his way into the main event by finishing second in the B Main. He was a non-factor in the finale, won by which Tony Stewart Racing teammate Donny Schatz.

For the last two years, it was unclear when, or if, Stewart would get back in a sprint car after Ward’s death. Stewart, who broke his right leg in a 2013 sprint car crash, was emotionally devastated and the incident was made worse by the accusation that he had intentionally targeted Ward, who had climbed out onto the track to confront the NASCAR veteran. A grand jury declined to indict Stewart.

Ward’s mother, Pamela, told the AP on Thursday that the family could not comment on Stewart until the civil suit they’ve filed is over. She said a date for the trial, which will be held this year in Utica, New York, has not yet been set. The Wards are seeking unspecified damages.

Ward also said she was unaware Stewart was returning to sprint car racing.

An important update:  Stewart withdrew from Saturday night’s finale, which resulted in the release of this statement from his public relations representative:

“Tony Stewart has scratched for the evening (Saturday night) and is reconsidering his schedule with the All Star Circuit of Champions due to his ownership of the series. Requirements of owning and managing the series supersede his own driving ambitions. We apologize for the change in tonight’s schedule and appreciate everyone’s understanding.”