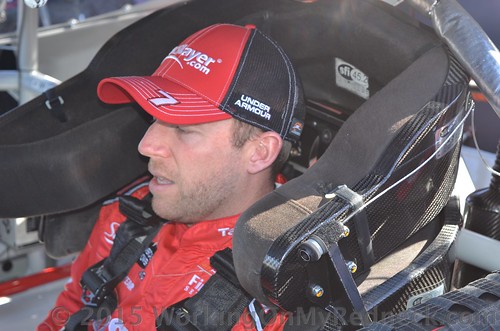 Are you wondering what is going on with Regan Smith?  All has been extremely quiet since the checkered flag flew at Homestead  in November.

If you thought Regan Smith might not find a ride in any of NASCAR’s national series this year, surprise!

The journeyman driver has landed a 12-race deal with Ricky Benton Racing in the Camping World Truck Series, which puts him on the track while also helps keep his options open to drive in the Cup Series should something come along.

“I wasn’t done racing — don’t count me out yet,” Smith devulges. “It’s just nothing was playing out to be in a good situation in Cup this year.”

The inability to land a quality Cup ride opened the door for Smith to finally team up with Ricky Benton, who he has known Smith since both were involved in the Pro Cup Series nearly two decades ago. The friends had spoken for years about Smith getting into one of Benton’s trucks, but the timing never worked out, that is, until now.

Smith will run Daytona for Benton’s team, then do the next five races after that. The team has sponsorship from Benton’s companies — BTS Tire and Wheel Distributors and Black’s Tire Service, as well as Advance Auto Parts, Goodyear Commercial Tire and Service Network and Valvoline.

“When you’re helping build something and grow something, the expectations come from within,” Smith said. “We’re going to expect a lot and work with that mentality — that we need to do whatever we can. I’ve been a part of building teams before, and I’m looking forward to at least still being at the racetrack.”

At this point in his career, Smith is, without a doubt, a survivor. Without funding, it has become increasingly difficult, almost impossible, even for experienced drivers to find a competitive ride.

But Smith, 33, has been able to stick around. He’s raced for eight different Cup Series teams, 12 different Xfinity teams and five different Truck teams (Benton will be his sixth), with several of those opportunities coming when teams turned to Smith as a substitute driver.

The way Smith’s career has gone, he knows another unexpected chance to drive could come any day. But for now, he’ll concentrate on being competitive in the No. 92 truck.

If you memory is good you might remember that Parker Kligerman had a fast start with Benton’s truck last year, posting three top-10 finishes to open the season. However the team’s performance plummeted off after that, and there wasn’t enough sponsorship to continue racing.

“If we could duplicate the start we had last year, that would be an ideal situation,” Smith said. “Then we could aim for top-10s and try to stay up there. We have to work to get consistency a little bit, but I think the sky’s the limit. There’s some really good people down there.”