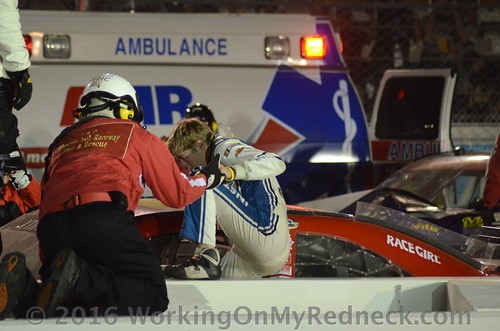 NASCAR announced today it is partnering with American Medical Response (AMR) to expand the capabilities of NASCAR’s medical support model and enhance on-track incident response. AMR, a recognized leader in the emergency medical services, will add a doctor and paramedic to the on-track safety team for each Monster Energy NASCAR Cup Series weekend.

NASCAR’s industry-leading medical standards remain in place; Infield Care Centers will continue to be staffed with experienced local emergency room physicians, maintaining the valuable connection with local medical facilities at every track. Combining the experience of local emergency practitioners with the familiarity that the AMR team will develop with drivers will positively impact the process for years to come.

AMR will position state licensed doctors and paramedics in a chase vehicle along with two NASCAR Track Services team members and immediately respond to an on-track incident. The paramedic and doctor will provide an assessment at the scene.

AMR, which currently delivers EMS support at a number of NASCAR events, will provide a physician to serve as the national medical director of the AMR Safety Team to oversee all services provided by AMR and work with the NASCAR Medical Liaisons and NASCAR Consulting Physicians.

AMR, a subsidiary of Envision Healthcare, is the largest provider of emergency medical transportation services in the U.S. and a leader in pre-hospital care and treatment.

Furthermore, AMR becomes the Official Emergency Medical Services Partner of NASCAR, and AMR will be the presenting partner of the annual NASCAR (Track Services) Summit.

About American Medical Response
American Medical Response, Inc., America’s leading provider of medical transportation, provides services in 40 states and the District of Columbia. More than 25,000 AMR paramedics, EMTs, RNs and other professionals work together to transport more than 4.4 million patients nationwide each year in critical, emergency and non-emergency situations. AMR, a subsidiary of Envision Healthcare Corporation (NYSE: EVHC), is headquartered in Greenwood Village, Colorado. For more information about AMR, visit www.amr.net and follow @AMR_Social on Twitter.