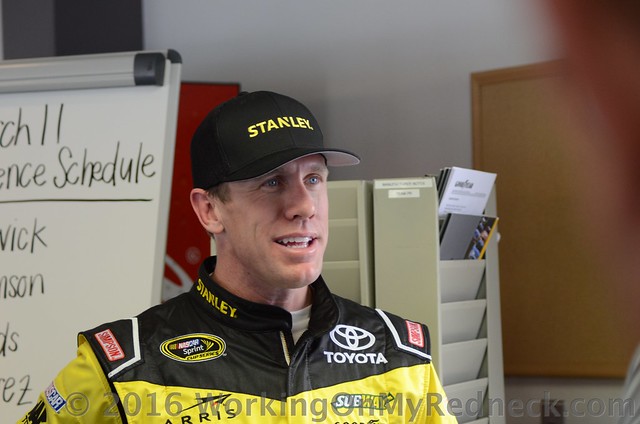 Carl Edwards remains a hot topic in NASCAR, two weeks after his abrupt retirement as a full-time driver.

Terry Smith, a political science professor at Columbia College, speculated in a Wednesday piece for KBIA’s Talking Politics that Edwards will challenge U.S. Sen. Claire McCaskill in Missouri next year. McCaskill, a Democrat, is in her second term.

Edwards didn’t exactly rule it out when reached by The Associated Press. He texted: “I believe firmly in the principles that the U.S. was founded upon. If I could help, I definitely would consider it.”

Edwards also stressed that has no such plans at the moment, but also quoted Gen. Douglas MacArthur: “No man is entitled to the blessings of freedom unless he be vigilant in its preservation.”

Edwards came 10 laps away from winning his first Cup title in November, then announced his retirement two weeks ago with a year remaining on his contract with Joe Gibbs Racing. He is 37, indicated only that his decision was personal and private, and did not rule out a return to racing. He also noted at the time that he’s interested in agriculture, aviation and politics.

His retirement has baffled the NASCAR community , with few having a clear understanding on what spurred Edwards’ decision.

JGR teammate Kyle Busch added his name to the drivers confused by the decision considering Edwards came so close to winning the title. Edwards had the race in hand until a late caution forced a final restart, and he wrecked trying to protect his lead.

“He had a shot to win the championship and then all of a sudden he just decides he doesn’t want to do it anymore. That’s kind of a shock to everyone I would presume,” Busch said. “It’s his own decision to make and you’ve got to give (respect) to a guy when he says he’s had enough and he’s done and he walks away.

“If that continues to hold true then more power to him but if there’s something else waiting in the wings, we’ll all have to wait to find out.”

Edwards has denied that health issues pertaining to him or anyone in his family was behind his decision. He lives in Missouri, has two young children and is married to a doctor. Edwards has always been extremely protective of his personal life, and that remained the case when JGR teammate Matt Kenseth, who also worked with Edwards early in Edwards’ career at Roush Fenway Racing, reached out to the driver.

“Carl has always been his own guy, right?” Kenseth added. “He kind of does his own thing, and if he decided that’s what he needed to do at the time, it doesn’t shock me he actually went through with it.”

Jamie McMurray, a former teammate of Edwards’ at Roush and fellow Missouri native, also had no answers.

“I was completely taken aback,” McMurray said. “Maybe there is someone in here that knew, but I was blindsided by that. Honestly, I hope that more comes of that story.”

This twist to Edwards’ retirement is very interesting and could make a lot of sense, since timing is everything.  But in light of Edwards’ insistence on privacy, running for a public office would require him to vacate most of his long sought after privacy while running for public office, as well as serving in that capacity.