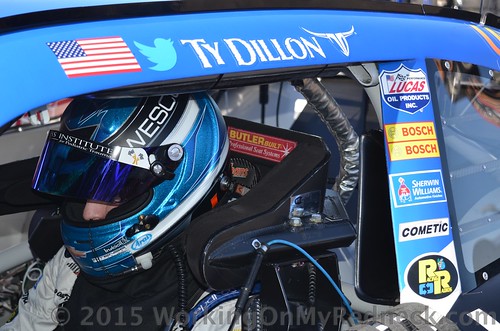 Back when Richard Childress announced that Daniel Hemric was going to join his stable of drivers for the 2017 season, he also made a passing statement that his grandson, Ty Dillon, would run most of the 2017 NXS schedule for Richard Childress Racing.  Well during Media Day at Charlotte Ty Dillon was asked about his NASCAR XFINITY plans.

This was his answer to that question:
“The wins weren’t what we wanted in the Xfinity Series the past couple of years, but we were growing as a team and changing as a team at RCR. We will win Xfinity races this year; I can guarantee you that. We have a lot of great things going on, a lot of great momentum with that side of the program. To answer the first part of the question, I’m going to be running 20 Xfinity races this year, so a pretty hefty schedule on that side, too. I think there are only six I can’t do.”

So, in essence, Ty Dillon will be running all of the races except the ones that will conflict with his MENCS race schedule.  Those would obviously be the ones that are not companion races and the venues are too far away to comfortably make via the RCR jet.