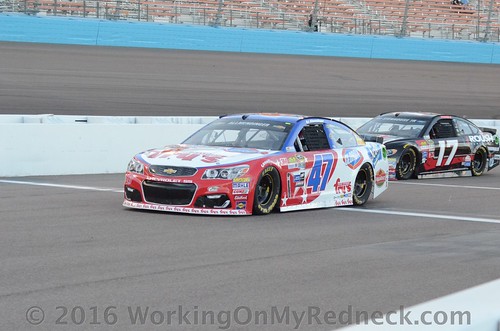 Earlier this month AJ Allmendinger tested at Charlotte Motor Speedway on what was roughly a 2.3-mile circuit similar to Daytona International Speedway that incorporates both the infield in Turns 1 and 2 and the regular 1.5-mile oval according to multiple sources.

The test was a collaboration between Charlotte Motor Speedway and NASCAR.

Recently there has been proponents that floated the possibility of incorporating a road course at Charlotte Motor Speedway. SMI CEO Marcus Smith told Motorsport.com at the time that an announcement was expected in due time, that was October 2015, but nothing materialized. He added that CMS’s plan included three different lengths of road course and the possibility could be “awesome.”

The road course itself is nothing new to Charlotte Motor Speedway which has hosted Sport Car Club of America events and other races in the past. However, since Joe Lee Johnson won the first race in 1960, the track has only used the 1.5-mile oval for NASCAR.

Certainly, if the Charlotte plan comes to fruition, transitioning to a road course could be an option at other facilities. Indianapolis Motor Speedway and Kansas Speedway, for instance, already feature road courses as part of their landscape.

A.J. Allmendinger was asked about the test during Tuesday’s media events:
“Here’s the deal… I don’t know what’s going to happen. I thought it was a lot of fun and I enjoyed it. You can bring something new to the schedule and something new if it was done. I’m all for it. I’m probably biased toward that. It’s kind of like the new format. Change can be good and it can be a little scary. We have to see how it plays out. But could it be successful? I think it would be a fantastic race and something the fans could truly enjoy.

WOMR  thinks that the idea of a road course during the “playoffs” now is very intriguing, to say the least!  That would complete the only missing discipline that presently represents itself in the “playoffs”.