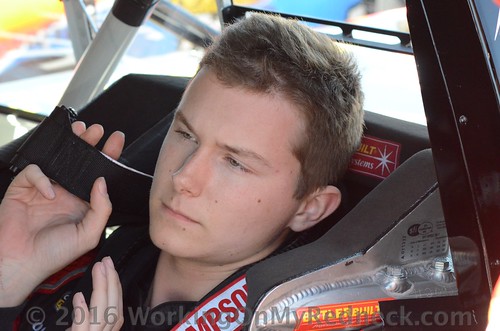 Joe Gibbs Racing (JGR) and driver Matt Tifft will continue their partnership during the 2017 NASCAR XFINITY Series season with Tunity, a cutting-edge mobile application that offers race fans superior experience when watching their favorite drivers, especially out of home. As primary sponsor of the No. 19 NASCAR XFINITY Series team and Tifft for the season opener at Daytona (Fla.) International Speedway, Tunity affords fans the ability to scan any muted TV and stream its audio directly to their personal devices.

Tifft, a young driver who understands the importance of digital media in today’s landscape, appreciates the opportunity ahead. As JGR’s only full-time driver in the XFINITY Series this season, Tifft will compete for the Sunoco Rookie of the Year and the XFINITY Series Driver’s Championship Awards. Tunity will continue as an associate partner all season on the No. 19 and again in a primary sponsorship role in additional 2017 XFINITY Series events, to be named later.

Joe Gibbs Racing has a rich history in the XFINITY Series accumulating 131 wins over 18 years that the program has existed. This past season was one of the best in the team’s history recording 19 wins achieved with drivers Erik Jones, Kyle Busch, Sam Hornish Jr., Denny Hamlin and Daniel Suarez, who won the XFINITY Series Championship with the No. 19 Toyota team at Homestead-Miami (Fla.) Speedway last November.

“To date, the off season has been pretty hectic, but productive at the same time. We have expended considerable energy assembling a great group of guys to compete in the XFINITY Series with Matt Tifft,” commented No. 19 crew chief Matt Beckman, who will also enter his rookie season on top of the pit box. “Ultimately, our goal is to live up to the standards of the No. 19 JGR effort from 2016 and compete for the Championship, once more, as the season winds down in Homestead later this year.”

Steve DeSouza, Executive Vice President of XFINITY Series Operations and Development added, “We look forward to continued development with Matt (Tifft) over this next race season.” DeSouza continued, “Matt’s shown strength through adversity and a strong willingness to advance his performance level for a long-term career in racing. I know Matt will take full advantage of this continued opportunity.”

The 20-year old Ohio native has 36-career starts in NASCAR’s top racing series over the last two seasons, while running a limited schedule in both the XFINITY Series and in the NASCAR Camping World Truck Series. Despite a three-month hiatus after rehabilitation from a low-grade glioma that was removed from his brain in July of 2016, Tifft earned one top-five and 6 top-ten finishes through his ten completed races with Joe Gibbs Racing. The top-five finish at Kentucky Speedway in Sparta last fall was significant, earned in the first race back after his brain tumor experience.

“It’s always been a dream of mine to compete full time in NASCAR, so the chance to drive for the best team in the industry and coming off the No. 19’s championship run is pretty cool. Already Beckman (Matt) and I have gone to work and I’m really looking forward to getting started this year. I think it’ll be an incredible opportunity and I can’t wait to get rolling,” said an eager Tifft.

Returning with Tifft in his full-season effort is sponsor partner Tunity, who lent support for the young rookie in 2016. “The team at Tunity is proud to stand behind Matt and the now No. 19 Tunity Toyota. Matt has proven his mental and physical strength time and time again and we are positive he will make us proud this season. Matt will surely create amazing and memorable moments for all NASCAR racing fans and we at Tunity hope to help by letting any fan hear the race while in front of a muted TV- in a bar, restaurant, at the gym or the airport,” remarked an excited Yaniv Davidson, Chief Executive Office of Tunity.

Growing brands Surface Sunscreen and BrainGear will also be full season partners with Tifft on the No. 19 Toyota Camry in associate sponsorship roles at Daytona International Speedway and in No. 19 primary sponsorship roles with marketing programs to be announced at a later date. The three Tifft partners will be used in different capacities throughout the XFINITY Series year in support of the young driver’s quest for a NASCAR XFINITY Series championship in his first full-season venture.