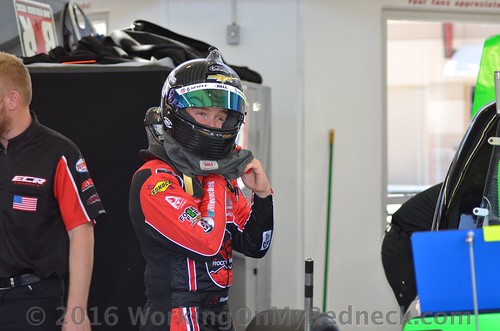 NASCAR has always been known as a family sport where the love of racing has been passed from generation to generation.

The Nemecheks will even be running for the same team – family-owned NEMCO Motorsports, which will field John Hunter Nemechek full-time in the No. 8 Fire Alarm Services, Inc., Chevrolet for 2017, and will also field Joe Nemechek in the No. 87 Fleetwing Chevrolet in a select number of NASCAR Camping World Truck Series events.

Joe Nemechek and John Hunter Nemechek have competed against each other on the race track just three times before, twice in the Allison Legacy Race Series, and once in the ARCA Midwest Tour. The first time the duo competed against each other was in the Allison Legacy Race Series at the Concord Speedway in 2011 where the son finished first, and the father second. In a rematch at the Carolina Motorsports Park John Hunter Nemechek finished third, and Joe Nemechek finished fourth. The other was in an ARCA Midwest Tour event at the Milwaukee Mile in 2013, where neither driver won but experience outran youth.

John Hunter Nemechek, who posted two NASCAR Camping World Truck Series victories and captured his first pole award during the 2016 season, may be at a disadvantage in Daytona. Joe Nemechek has comprehensive experience at the ‘World Center of Racing,’ having five pole awards and two victories (1998, 2002), four top-five and seven top-10 finishes in the NASCAR XFINITY Series. In addition, he has the all-time NASCAR XFINITY Series most starts record, including the most laps completed record, and number of pole awards record at the Daytona International Speedway. Across the top three NASCAR divisions Nemechek has 74 total starts at the Daytona Beach, Fla., facility.

The elder Nemechek last competed in the NASCAR Camping World Truck Series in 2015 at the Texas Motor Speedway, finishing in the sixth-place.

It is not unusual for family to compete against one another in NASCAR’s premier series as sets of brothers have been the norm rather than the exception. Joe Nemechek competed together with younger brother John Nemechek in three (Watkins Glen International, Phoenix International Raceway and Walt Disney World Speedway) NASCAR Camping World Truck Series events.

Both father and son have collected victories, pole awards, and claimed the title of Most Popular Driver in their respective series, but only Joe Nemechek has claimed the series championship trophy. Without the dedication Joe Nemechek has had towards his son’s career, John Hunter Nemechek knows he might not have had the chance to show his talents, and have the opportunity to team up with his dad at the Daytona International Speedway.

Joe Nemechek and John Hunter Nemechek look to add their names to the short list of fathers and sons who have won races head-to-head in NASCAR’s premier series, and be listed alongside Lee and Richard Petty, Richard and Kyle Petty, Bobby and Davey Allison, Dale and Dale Earnhardt Jr., and Buck and Buddy Baker.