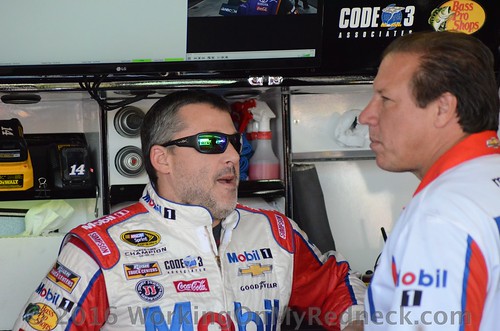 The move from Chevrolet to Ford during the offseason was more than just an undertaking of putting new body panels on the cars for Stewart-Haas Racing.

As part of the switch, SHR now solely relies on building its own chassis (the car frame) instead of getting chassis from Hendrick Motorsports. That change by itself meant adding additional people to the payroll and a lot more work to get ready for 2017.

Team co-owner Tony Stewart seems pleased with how his team has converted to a new fleet of cars. Speaking at the Ford Performance racing support center, Stewart said Wednesday he feels confident his team has been organized well enough to make the switch without losing a beat. The team announced the manufacturer change 11 months ago.

“I don’t know that necessarily we would have re-bodied all the cars, but the aero package is different so all of [the cars had changes],” Stewart said. “We did have a big addition employee-wise, but it was more because of the chassis department than it was anything else.

“We were geared up for this. We were ready for it. We had plenty of time to prepare for this offseason, so when the end of the season came about, we were ready to go full steam ahead.”

Stewart said he felt the transition so far was smoother than he thought it would be when the team made the decision to change, a decision it did not take lightly considering Stewart’s long relationship with General Motors and the quality cars and engines SHR had in winning the 2011 title with Stewart and the 2014 title with Kevin Harvick.

“It took a lot of meetings,” Stewart said about Ford’s recruitment of SHR. “I learned something a long time ago — it doesn’t cost a dime to listen.”

“So after the second meeting, I realized how serious they really were about this and realized very quickly this was something we needed to explore and run through and take very, very seriously.”

The addition of SHR gives Ford two 2017 potential championship organizations in SHR and Team Penske. Two of Ford’s biggest racing namesakes — Roush Fenway Racing and Richard Petty Motorsports — have struggled miserably, with both organizations downsizing by one car for 2017.

“The downsizing that you’ve seen is a way for us to re-focus those teams and get back to the fundamentals and get them back on the right path,” said Ford Performance global director Dave Pericak. “You don’t want to have so much going on that you can’t focus in areas that you need to focus and fix what you need.”

Pericak believes the 2017 aerodynamic package, which has reduced downforce in the cars, will help the Fords be more competitive.

Even great performance doesn’t always translate into sponsorship. While SHR will field four cars in 2017, Clint Bowyer, stood in front of a Mobil 1-branded car during the event even though Mobil just has a few races with Bowyer next season. The team has not announced an anchor sponsor for the majority of races for Bowyer, who replaces Stewart in the No. 14 NASCAR Cup car.

“We’re still working, still looking for sponsors for the 14 car so feel free to bring whatever you’ve got,” Stewart told the media.

The Bowyer car would run without sponsorship, if necessary, or with the Haas Automation logos of team co-owner Gene Haas on the car. Even with Ford support (manufacturers give teams money in addition to engineering support), Stewart said sponsorship is vital.

“We’ve still got to do our job,” Stewart said. “I don’t think that alleviates much of anything. We still have to go out and do our job and get the sponsorship we need to run that car.”

It will be very interesting to see if SHR starts off this season with the same competitiveness that they ended on in 2016 season.