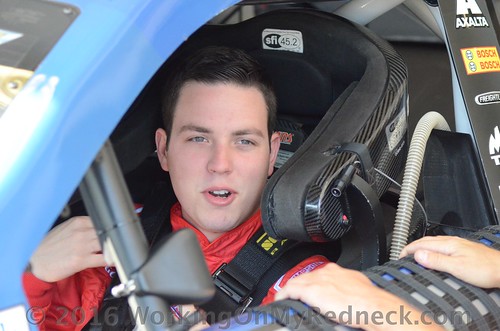 Alex Bowman watched from the trailer at Tulsa Expo Raceway as his race team put the final touches on Ryan Smith’s No. 55x midget before Saturday night’s C-Main at the Chili Bowl Nationals last Saturday.

For the last two years, Bowman has fielded a car in the Mecca of Midgets. He’s spent the off-season putting in a lot of late nights preparing the race car — but has left the driving duties to someone else.

This year, his strategy was fairly successful. Smith, a sprint car racer from Pennsylvania, won his eight-lap heat race and finished fourth in Qualifying Race 4 on Thursday night. He then transferred to the A-Feature and finished 11th behind eventual event winner Christopher Bell. On Saturday, Smith transferred from the C-Main into the B-Main but settled for a finish of 13th after starting at the rear of the field.

Now, Bowman’s focus returns to NASCAR. And when it comes to unemployed Monster Energy Cup drivers, it would difficult to find one with as much potential as Bowman.

The 23-year-old racer for Tuscon, Arizona, had the opportunity to audition last season in the No. 88 Hendrick Motorsports Chevy while substituting for the sidelined Dale Earnhardt Jr. and his performance was solid.

But with less than a month before NASCAR teams report to Daytona International Speedway for Speedweeks, the only race on Bowman’s schedule so far is The Clash at Daytona.

“It was a lot of fun,” Bowman said of his experience behind the wheel of the No. 88 Chevy. “If the Clash is my last Cup start, I got to contend for the wins in the Cup series and drive for Hendrick Motorsports, lead a lot of laps and have a lot of fun doing it.”

“I proved I could do it. I think that’s fair to say. I enjoyed every minute of it, and I’m extremely grateful for the opportunity. I made a lot of good friends. A lot of them are here (at the Chili Bowl) with us hanging out. It’s something I’ll cherish for the rest of my life, no matter which way my career goes.”

Bowman scored three top-10 finishes in his 10 starts behind the wheel of the No. 88 Chevrolet. By far his most successful run was in front of his home crowd at Phoenix International Raceway where he won the pole and led 194 of 324 laps before finishing sixth.

Although he’s posted one pole, three top fives and seven top 10s in 11 starts for JR Motorsports, Bowman doesn’t have the backing to make a full-time Xfinity Series ride work with the team. But he’s not giving up hope.

“It’s just money,” Bowman said. “This sport is so money-driven and it’s not a fully funded deal. I can’t write a check to drive a car. I’m trying to get checks written to me to drive a car.

“If the right situation came up and there was a good sponsor and everything fit, it absolutely would be a possibility. But right now, there’s no funding to go do it.”

He still has his day job with Hendrick Motorsports. He’ll still test for the organization and drive the simulator. Although he was once on the Toyota Racing Development fast track, Bowman realizes how fortunate he is to be in the Hendrick fold.

“I’m so grateful to them,” Bowman said. “It’s not a situation I want to leave. It’s such a great team to be a part of. I learn so much every day I’m in the shop. And I’m able to be around Jimmie Johnson, Jeff Gordon, Dale Jr., Kasey Kahne and Chase Elliott. I’m just trying to be a sponge and learn all I can from all of them.

“If an opportunity comes up down the road, that I can use that information, it’s always something that’s going to benefit me the more I can learn the longer I’m there.”

And it doesn’t hurt to be in the building, should HMS, JRM or another Chevrolet team needs a fill-in driver down the road.

“You don’t want to wish bad luck on anybody, but in racing, definitely things happen,” Bowman said. “But I’ll be ready to go on a moment’s notice, and we’ll probably just wait and see. The reality is, I’ll probably only race The Clash this year, but I’ll definitely come out of the year with a lot more knowledge then I had going in.”

It is a huge shame that a driver with the talent that Bowman has exhibited last year, while filling in for Dale Jr. during his recovery period, has not been able to land the requisite sponsorship backing to race at either the XFINITY level or in the Monster Energy NASCAR Cup Series.  He has proven that he can “hang with the big dogs” on Sundays!