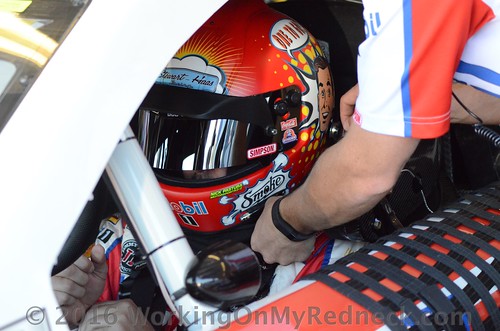 Tony Stewart was well satisfied with his efforts at track preparation, and the result was excellent racing in the Chili Bowl Midget Nationals at the Tulsa Expo Center.

Given the huge car count at the quarter-mile dirt Chili Bowl track, one of the most difficult challenges is keeping the track consistent throughout a succession of heat races, qualifying races and features that start in the morning and end late at night.

“There’s no physical cushion, but the top’s still the fast way around,” Stewart said. “We’re starting to get a middle back here, too. When you’ve got 96 cars that started the night, it’s hard to keep it the same for the whole night. Last night I was not happy with what we had until we got to the last two qualifiers, the “B” Mains and the “A” Main, and we finally got caught up with it.

“It was really narrow and really heavy early in the night. Tonight we tightened it up a little more. From the first heat race on, guys could go everywhere they wanted to go and pass. It’s a little slower pace, but the racing’s better, and guys can actually pass. They aren’t jumping their race cars trying to run on a six-inch ledge.”

Stewart may be a three-time champion at NASCAR’s highest level, but track preparation nevertheless is a passion for him. You’ll often find him on a track at Eldora Speedway, the dirt half-mile he owns.

Just because Stewart has stepped away from the Monster Energy NASCAR Cup Series doesn’t mean he has abandoned the competitive side of racing—far from it.

“I wish I’d have finished a little better at the end of the year,” Stewart said of his final NASCAR campaign, in which he won at Sonoma and qualified for the Chase. “But I’m looking forward to all the stuff we’re going to be doing this year—late model racing, sprint car racing. I’m building a three-quarter midget to run a couple of (county) fair races this year.

It will be very interesting to see his race schedule for 2017, as well as where the wrongful death lawsuit leads Stewart!