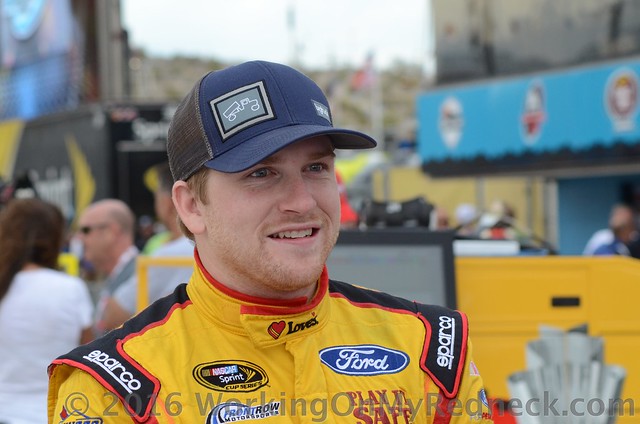 Chris Buescher can’t wait to get the next phase of his NASCAR career started as a member of JTG Daugherty Racing.

Buescher spent last season with Front Row Motorsports one season removed from winning the XFINITY Series championship for Roush Fenway Racing. As a member of Front Row, Buescher was still under the RFR umbrella and made the Chase thanks to his win at Pocono Raceway.

“It was incredible,” said Buescher. “I’m proud of Front Row Motorsports and the No. 34 team for what we were able to accomplish … to get that first win, have a lot of good runs along the way and be competitive at different types of tracks was a blast.

“Unfortunately, we didn’t perform as well in the Chase as we would have liked. I learned a lot along the way.”

But the off-season saw more maneuvering behind the scenes that ended with Buescher moving to JTG Daugherty, where he’ll team with AJ Allmendinger in a brand new No. 37 ride as the team expands to two entries. He’s still under Roush auspices but will transition from a Ford to a Chevrolet as part of the new arrangement.

“Everything has been a process to work through,” Buescher said. “It’s tough to still be under contract with Roush – it being a different manufacturer. But this is the best way to go on the racetrack and be competitive, get more seat time and be ready to come back for 2018 in whatever that brings. Right now, Roush has said the plan would be to get three teams started back again in 2018 and me go back there.”

Buescher will have Trent Owens as his crew chief this year in the Monster Energy NASCAR Cup Series. Owens last worked with Aric Almirola at Richard Petty Motorsports.

Ironically, Buescher became the series’ first first-time winner last year since Allmendinger’s Watkins Glen victory in 2014 that earned JTG its first Chase berth. Buescher sees no reason why both he and Allmendinger can’t make second career appearances in next year’s “playoffs.” Although Allmendinger finished 19th in the 2016 standings, he put together four top 10s and an average finish of 11.7 in the final six races.

“That’s awesome, for a single-car team to do that,” Buescher said of Allmendinger’s average finish in the final six races, which placed him in a tie for fifth among all drivers that competed in all events in that span. “We all know how good AJ Allmendinger is on road courses and how that applies to short tracks, and they’ve had speed at the mile-and-a-half ovals.”

Allmendinger is looking forward to having a teammate for 2017.

“Having a second car has been discussed for a while and to have it come together is exciting,” Allmendinger said on SiriusXM NASCAR Radio. “Chris is talented and will bring a different perspective to our organization. The goal is to get both of us back to the Chase in 2017.”