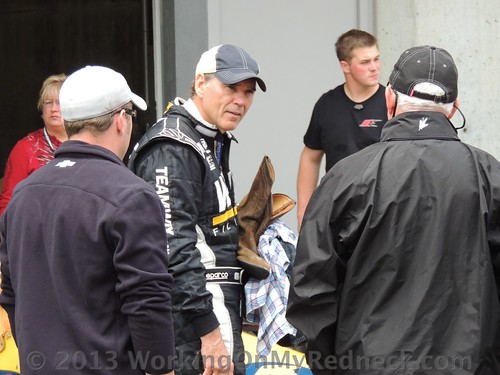 Ray Evernham believes a return by Dodge to NASCAR competition would be good for the sport.

Earlier this month at the Ferrari Finali Mondiali at Daytona International Speedway, officials from the manufacturer hinted in recent days that Chrysler was considering coming back to NASCAR racing after stepping away in 2012.

“I think it is possible we can come back to NASCAR,” said Sergio Marchionne, CEO of Ferrari’s parent company – Fiat Chrysler Automobiles. “I think we need to find the right way to come back in.”

The possibility triggered much buzz around the NASCAR world including with Evernham, who fielded a two car Cup team between 2001-2007 before departing as a team owner. During the course of the Evernham team’s existence Bill Elliott, Casey Atwood, Jeremy Mayfield, Kasey Kahne and Elliott Sadler drove cars that were responsible for six wins including a victory by Elliott in the 2002 Brickyard 400.

After Evernham closed his doors, Dodge continued in the sport until the end of the 2012 season when the manufacturer’s business challenges forced an exit from NASCAR competition.

If Dodge were to return, Evernham believes it would be a good thing for NASCAR.

“To me the more manufacturers that come in it shows that NASCAR can provide a global environment, a global opportunity for any manufacturer,” Evernham said. “Hopefully Dodge will come back again. You can’t fault them because they had financial issues. The fact that they are looking to come back says they never really wanted to leave. The more manufacturers that put money into this sport and make our racing economy better, if you will, is better for everybody.”

Evernham isn’t alone in his enthusiasm for a potential Dodge return. NASCAR Hall of Famer Rusty Wallace would also like to see the manufacturer back in the sport.

“They are a major manufacturer, and they should be there,” Wallace said.

While the sanctioning body would not commit to having specific talks with Dodge officials, NASCAR did acknowledge conversations are ongoing with manufacturers interested in participating in the sport.

“There is increasing excitement around NASCAR,” said NASCAR spokesperson David Higdon. “We continue to have on-going dialogue with a number of auto manufacturers about their interest in joining our sport. We look forward to exploration with them on this topic.”

Although Evernham remains proud of the effort his team gave under the Dodge umbrella and wishes success to a future should the manufacturer come back to NASCAR.

“There isn’t anything better for NASCAR to remain healthy and grow stronger than participation from the automobile manufacturers,” he said. “Dodge has a long history in the sport and I’m sure they’d like nothing more than to be able to come back and add to that history. I’m hoping it happens.”

WOMR concurs with Evernham’s conclusion that Dodge’s participation within NASCAR would be great, not only for the manufacturer, but especially for NASCAR and the competition within!