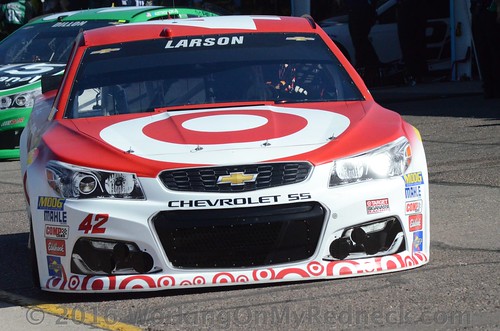 Earlier this year Target announced that it would pull completely out of the sponsorship role with Chip Ganassi Racing’s IndyCar teams. So it was no real great surprise that Target has continued to reduce its sponsorship commitment on the NASCAR side of CGR for 2017.

It was announced today that Target will reduce the amount of NASCAR races it serves as the primary sponsor of Chip Ganassi Racing’s #42 Chevy driven by Kyle Larson in 2017 to allow other companies to work with him. Target, which along with its handful of vendor partners has been Larson’s sole major sponsor since he joined NASCAR’s premier series, will still have the majority of races on the # 42.

Target previously had all the races, though it passes through a number of them annually to brands it works with like Energizer and Axe. The deal is part of a mutual agreement between CGR and Target. Sources said the move frees up about 5-10 primaries worth of inventory on the #42. Target’s deal expires on the NASCAR side after 2017, and the retailer ended a 27-year partnership on Ganassi’s IndyCar side after the ’16 season.