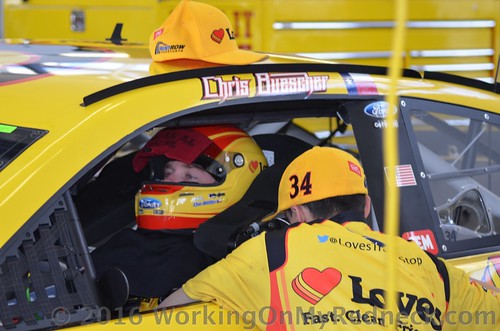 The NASCAR 2016 season ended with a really strange announcement.  Roush Fenway Racing was entering into a loan deal with JTG/Daughtery Racing.  This type of loan deal was not new or unheard off in NASCAR.  However, this kind of deal has never been consummated between two race teams of differing manufacturers, ie, Ford and Chevrolet.

The RFR/Ford/Buescher loan to JTG/Daugherty, a Chevy team, is definitely a first for the NASCAR premiere series that I can recall!  There are so many more question than answers regarding this one season “driver loan” of RFR driver Chris Buescher.

It seems rather awkward that a Ford driver will be privy to the well guarded performance and engineering proprieties of the Chevy industry!  How does that cross-pollination, Ford-Chevy racing technology, work within the racing community?  How much information will the Ford RFR driver, Buescher, be privy to during this one year loan?  There are obvious Chevy proprietary technology that the manufacturer will not want to let out of the bag, shared with Buescher, during the 2017 race season.  Likewise, there are certain Ford technologies that this manufacturer does not want Chevy to learn that Chris Buescher has knowledge of presently.  How does that fit into this cross-pollination puzzle?  It is mind baffling for sure!

Will this JTD/Daugherty-RFR agreement compromise the competitive edge of one manufacturer with another?  That is not out of the question to ask this question.  How are the closed held manufacturer performance “secrets” going to be guarded?  My head is spinning with questions!  This particular loan deal seems to throw up  many red flags, caution flags and curious signs all over the garage!

And the sign said “Long-haired freaky people need not apply”
So I tucked my hair up under my hat and I went in to ask him why
He said “You look like a fine upstanding young man, I think you’ll do”
So I took off my hat, I said “Imagine that. Huh! Me workin’ for you!”
Whoa-oh-oh

Personally, after trying to come to terms with this RFR/JTD/Daugherty deal, my head feels like I am on a dirt track, backing it into the turn, getting down heavy on the loud pedal, I am taking whatever the track is giving me, and I am rocketing down the back straight away with caution to the wind!

Could Ford/RFR and JTG/Daugherty/Chevy be throwing caution to the wind and just flat “gassing it up” for 2017?  We shall see what the long term affects may be from this “loan” deal when the checkered flag flies at the end of the year at Homestead!