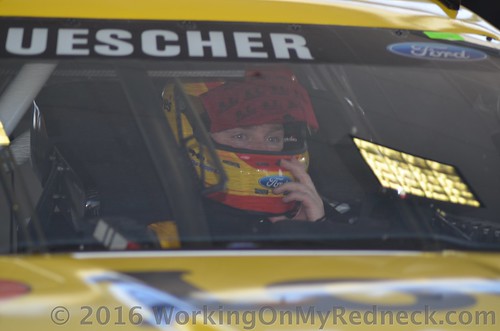 NASCAR premier series driver Chris Buescher says he remains under contract with Roush Fenway Racing.  However, for the second consecutive season the Prosper, Texas native will drive for a still another team not named RFR when he straps in the cockpit for 2017.

The end of November brought with it confirmation that the 24-year-old will compete full-time in a new, second entry to be fielded by JTG Daugherty Racing for the upcoming year. JTG Daugherty had one full-time team with driver AJ Allmendinger in the No. 47 Chevrolet in 2016.

Buescher, the 2015 NASCAR XFINITY Series champion, spent ’16 driving the No. 34 Ford for Front Row Motorsports where he earned his first premier series win in the weather-shortened Pocono event and made the 16-team Chase for the NASCAR Sprint Cup. Heady stuff for a rookie.

“It was pretty incredible,” Buescher said of his season with Front Row and crew chief Bob Osborne. “I’m just so proud of Front Row Motorsports and the No. 34 team for what we were able to accomplish … to get that first win and have a lot of good runs along the way, be competitive at different types of tracks was a blast.

“Unfortunately we didn’t perform as well in the Chase as we would have liked … (but) I learned a lot along the way.”

Buescher’s victory came at Pocono Raceway in August. It was his 27th career start.

Having his 2017 plans in place eases much concern but Buescher, 16th in points for 2016, said there are “still a lot of moving pieces floating around.”

Some are comparable to what he faced heading into this past season when he transitioned from the XFINITY Series.  Still, other obstacles are entirely different.

“There are some unknowns to work through,” Buescher said. “But I’m still under contract with Roush Fenway.”

Team personnel and other aspects of the new entity have yet to be announced. Cars won’t be on the track for competition until February. Until then, Buescher said he will be looking over notes from the previous season in an attempt to better understand what worked, what didn’t, and why.

“That’s pretty much the bulk of what we can do (for) next season … as we kind of wait out the calm before the storm,” he said.

It is going to be very interesting to see how this odd loan deal will pan out for JTD/Daughtery Racing and the once powerhouse RFR.

Kraus Teams Up With Mike Hillman At Richmond