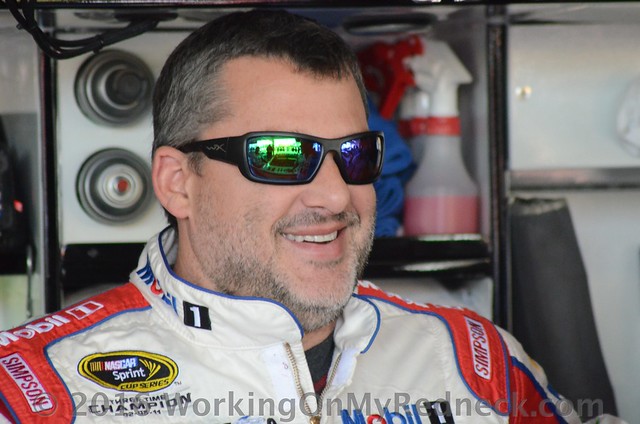 To honor three-time NASCAR Sprint Cup Series champion Tony Stewart as he retires from his 20-year NASCAR driving career, the motorsports industry came together in unprecedented fashion at the season-ending NASCAR Awards Banquet by making a $1.8 million contribution on Stewart’s behalf to the EB Research Partnership, the largest global non-profit dedicating to curing EB.

EB, or Epidermolysis Bullosa, is a devastating skin disorder. Those with EB lack critical proteins that bind the layers of skin together. Without these proteins, the skin can tear apart, blister and sheer off, leading to severe pain, disfigurement and wounds that never heal. EB can also affect the body internally, causing blisters in the eyes, mouth, esophagus and the fusing together of fingers and toes. EB affects one in every 50,000 births and is not specific to any ethnicity or gender, but because it only affects an estimated 25-30,000 people in the United States, advancing research to combat this disease relies on the generosity of individuals and corporations.

The industry initially targeted a $1.4 million donation to the EB Research Partnership as a subtle nod to Stewart’s No. 14 car number, which he drove to his third Sprint Cup title in 2011 and chose in honor of his hero and friend, the iconic A.J. Foyt who raced the No. 14 throughout his versatile career. However, widespread support for this initiative quickly gained momentum and the original $1.4 million target was easily surpassed.

“Tony wanted to have a very low-key sendoff during his final NASCAR season and he was pretty emphatic about it. He certainly earned a lot of recognition for all that he accomplished, and as an industry we felt it was important to honor him,” said Mike Helton, vice chairman, NASCAR. “People know how passionate he is about motorsports, but he’s equally passionate about helping others. On behalf of the entire motorsports industry, we felt this collective donation in Tony’s name was a fitting tribute to all that he’s accomplished during his NASCAR career.”

Well known for his accolades on the racetrack, which includes 12 driving championships and victories in nearly every American-based racing series, Stewart is also known for his philanthropy.

In 2003, he formed his own charitable foundation. Known simply as the Tony Stewart Foundation, the 501(c)(3) organization’s goal is to raise funds primarily distributed to serving three specific groups – chronically ill and physically disabled children, animals that are endangered or at-risk, and drivers injured in the sport of motor racing. To date, the Foundation has awarded more than $6.5 million to assist charitable initiatives for more than 150 well-qualified organizations throughout the United States.

Stewart’s work on behalf of the foundation crossed paths with his love for music earlier this year when he met Pearl Jam frontman Eddie Vedder. The two discussed their work in racing and in music, respectively, before the conversation dovetailed into their mutual commitment to charity. It was here where Stewart learned about EB from an impassioned Vedder, who co-founded the EB Research Partnership.

“When I first heard about it, it was quite hard to grasp the intensity of the condition,” Vedder said. “It’s about the most insane skin disorder you could imagine. And when you realize it also affects the internal organs, you see it as diabolical. It’s very hard to describe until you meet the young folks with it, and they make you realize how much you take for granted. You also realize that these are some of the strongest, coolest, most admirable people on the face of the Earth.”

The tenacious and sometimes cantankerous demeanor Stewart carries at the racetrack vanishes when he is off the track and in the presence of children, especially those who face physical and mental challenges. Children fighting EB have a perseverance and strength that is unworldly, and it has resonated with Stewart.

“The pain these kids face is constant, and yet they still find ways to stay upbeat,” Stewart said. “You quickly realize that your idea of a bad day is nothing. It puts your life and the things you take for granted in perspective. But it also makes you mad, because this is a devastating disorder that no one should have to endure. Yet it exists, and after seeing it, you want to do anything you can to make it go away.”

Stewart’s $1.8 million donation to the EB Research Partnership will accelerate life-changing research and reduce the timeframe of getting results for children with EB, while ensuring treatments go to those in need as swiftly as possible.

This donation on Stewart’s behalf is an embodiment of all the philanthropic work Stewart has performed as a NASCAR driver. He never sought accolades for his work, but his charitable efforts have been noticed nonetheless.

Stewart was named “Most Caring Athlete” by USA Weekend in 2004 and in that same year was selected by The Sporting News as “NASCAR’s ‘Good Guy’” and received the NASCAR USG Person of the Year award. In 2008, NASCAR Illustrated bestowed upon Stewart its Person of the Year award, as Stewart’s Prelude To The Dream all-star dirt Late Model race at Eldora Speedway in Rossburg, Ohio,  raised more than $4 million for charity during its eight-year run. In 2009, Stewart was nominated for the National Motorsports Press Association’s (NMPA) Humanitarian and Spirit awards, each of which recognizes philanthropy. In 2010, Stewart again was a finalist for the NMPA Humanitarian award, becoming the only person to ever be nominated in back-to-back years. Making the 2010 selection even more noteworthy was that Stewart won and earned $100,000 for his Foundation. And in 2013, Stewart earned the prestigious NMPA Myers Brothers award, which recognizes outstanding contributions to the sport of stock car racing.

“Tony’s legacy on the track is known and respected, but his efforts off the track should be known as well, even though he’ll never be the one talking about them,” Helton said. “Tony Stewart is a true humanitarian, and this sport is better off thanks to him and all of his contributions. It’s only appropriate that we, as an industry, can contribute to Tony’s philanthropic endeavors.”