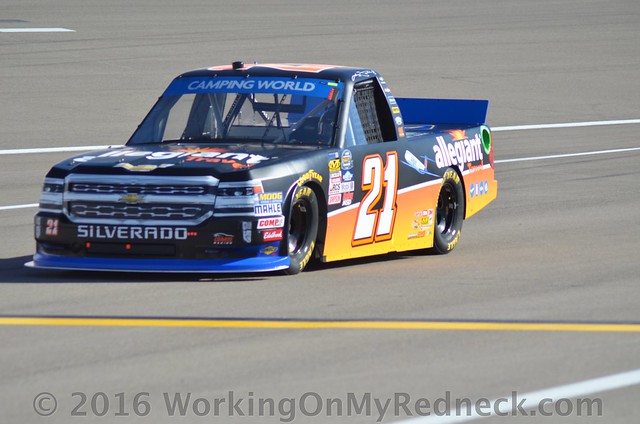 On October 15, 2015, NASCAR Camping World Truck Series (NCWTS) veteran Johnny Sauter announced he would be joining Gallagher Motorsports Racing (GMS) for the 2016 season in an effort to claim his first NCWTS championship. The move was unexpected and some questioned if a young team, like GMS, could outperform the more established teams of NASCAR’s roughest series.

Flash forward one year and two weeks to October 29, 2016 at Martinsville Speedway. After reuniting with former crew chief and longtime friend Joe Shear Jr. in June, Sauter racked up 12 top-10 finishes in 13 starts leading into the first race of the second round of the inaugural Chase for the NCWTS Championship. Sauter led 50 laps to clinch the win and lock the No. 21 team into the position to compete for the title at Homestead-Miami Speedway. He followed that up with a statement win at Texas Motor Speedway the following week and came within one restart of making it three-in-a-row at Phoenix International Raceway.

In his 13th NCWTS season, Sauter raised the championship trophy alongside his family and a team that had just completed its third full-time season in NASCAR. He completed what was statistically one of his best seasons with 3 wins, 12 top-five and 19 top-10 finishes. His three wins contributed to an overall total of six victories for GMS, who only had one win in the series heading into the 2016 season.

“A lot of people asked if I really thought the move to GMS [Racing] would result in a championship. After talking with Mike Beam and Maury [Gallagher], I truly believed in their goals for the team and felt like it was the right move if I wanted to win a title,” said Sauter. “The progress this team made throughout the season was incredible. It’s a relief to finally be able to say I’m a champion, but there’s also that feeling that it’s supposed to be that way. The reason we compete every weekend is to be the best so anything less would be a disappointment.”

Sauter has found a home with GMS and will return in 2017 to defend not only his win at Daytona International Speedway, but his NCWTS Championship as well. He will continue to build on the Sauter-Shear legacy, a history that started in the Midwest with their fathers competing against each other.

“I’m excited to do this again, especially with Joe [Shear Jr.]. I don’t think we would have won a championship without him last year. We’re going to start where we left off, make up for those four races I didn’t finish in the top 10, and win that owner’s championship for Maury.”

GMS will release details about plans for the 2017 season, including additional drivers and sponsors, at a later date.
ABOUT GMS RACING, LLC:  GMS Racing competes full-time in the NASCAR Camping World Truck Series with drivers Johnny Sauter and the NASCAR XFINITY Series with Spencer Gallagher. GMS Racing is housed in a 100,000 square-foot state-of-the-art campus in Statesville, North Carolina, alongside GMS Fabrication.