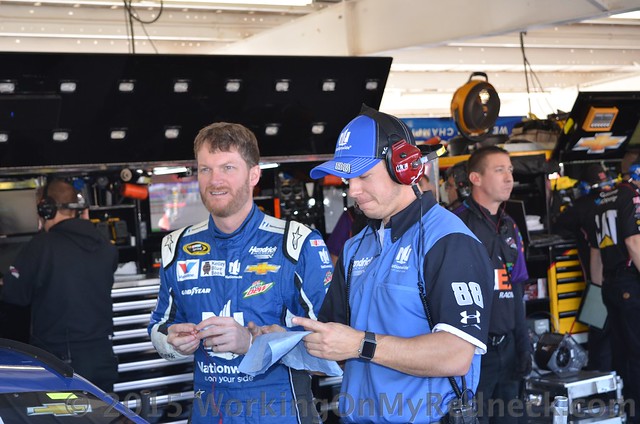 A few months from believing he “may never race again” in NASCAR, Dale Earnhardt Jr. now believes he is only a few weeks from being cleared to return the his familiar cockpit, the driver compartment of the HMS No. 88 Nationwide Chevy.

The Hendrick Motorsports driver, who missed the last half of the 2016 season after suffering a concussion, said he hopes to turn laps in a December test and again in a January session before racing his No. 88 Chevrolet in the season-opening Daytona 500 on Feb. 26. Earnhardt declined to specify where the tests would occur but intimated they were the final steps he alluded to last week on his podcast.

“Basically, the test in December would be the final box checked,” he told NBC Sports in a Tuesday interview at Hendrick Motorsports, where he unveiled a new paint scheme he designed with primary sponsor Nationwide for the 2017 season. “Once that’s done, I am jumping into the hamster wheel again. I’m excited.”

In his first extensive comments since a late August news conference to announce he would miss the rest of the 2016 season, Earnhardt revealed the depths of his long recovery from a concussion that he sustained in a June 12 wreck at Michigan International Speedway. It was at least the fifth concussion that Earnhardt has sustained during his NASCAR career, but the severity of the symptoms were enough to worry the 13-time most popular driver that his career was over.

“I mean I went through some really doubtful moments with this whole process when I was not doing well and my symptoms were really, really bad, and they lingered,” he said. “I’d never had the symptoms stay that long.

“I was thinking, ‘I may never race again. I don’t know how this is going to end.’ So I went from not knowing if I could do it to having to build my confidence back one little Lego at a time.”

Earnhardt said the symptoms, which centered on problems with balance and vision (known as “gaze stability”), began to dissipate over the past month. During the photo shoot Tuesday, he wasn’t wearing the thick, black glasses that he often wore in public during his recovery.

“The first five or six weeks, (the symptoms) were super heavy and weren’t getting better,” he said. “So I was really getting nervous. Man, you’re sitting by yourself at home with all this going on and thinking to yourself, ‘What if I’m like this the rest of my life? What if this is just a permanent injury?’ ”

Earnhardt healed much more quickly from his previous concussions. During this recovery, he kept detailed daily notes “so I could see that I improved from a week ago.”

“I was used to things changing by the day,” he said. “I was used to improvements in 24 hours and literally being able to feel it and know it.”

Last month, Earnhardt stopped taking medication that numbed his symptoms, and he noticed a marked improvement in his condition.

“The last five weeks have been great,” he said. “It’s not really that I feel like myself more every day, but the medication kind of numbs you and knocks your edge off. Every day, I’m reminding me of my older self before the injury, which is a good feeling.”

“Every time I see (team owner) Rick (Hendrick) — probably once every two weeks — he’s like, ‘I didn’t know you could get better! You’re even better than the last time I saw you, and I thought you were great then.’ ”

Hendrick said Nov. 18 at Homestead-Miami Speedway that he anticipated Earnhardt back in a car in December.

Earnhardt, who has been practicing on a simulator for a few months, said Tuesday he expects he will need to shake off some rust during the tests the next two months before heading to Speedweeks at Daytona International Speedway.

“It’s going to be tough, but hopefully by the time we get to Daytona, we hit the ground running and everything feels like it needs to feel with my confidence,” he said. “But it’s going to take a couple of good runs to say, ‘Oh, still got it.’ Even after all these years, you just don’t know.

“In no professional sport — baseball, football, I think racing is the same – no one can step away and then jump right back in right where they left off. The series is too competitive. The series is evolving all the time. The drivers evolve with it week after week after week. They’re in that hamster wheel, and if you get out for any period of time, I can’t expect to jump right back in there at the top of my game.”

Though he wasn’t behind the wheel, Earnhardt found some semblance in the photo shoots and production work this week with Nationwide.

On Monday, he donned his firesuit for the first time since his most recent start July 9 at Kentucky Speedway, and he felt an unexpected sense of comfort and confidence.

Earnhardt was a more frequent attendee at races during the last two months (including some stints in the NBC Sports booth), but missing the past 18 races also caused some disconnect.

“Being out of the routine is so foreign,” he said. “After several weeks, you don’t get used to that, but you feel like you get so distanced from all this. To jump back into it with both feet with the (Nationwide paint scheme unveil) has really been overwhelming, sort of breathtaking.”

Because he hasn’t driven in several months, Earnhardt said “my confidence is like really low, and doing these little things like this photo shoot are kind of bringing it back up. Like I’m an old phone being put on the charger. I feel like I’m an old smartphone that’s just been laying around with a dead battery, and this is sort of like bringing back that feeling that I know I can do this, and I know this is where I belong.

“My confidence is critical to my ability to do it. If I don’t believe in myself or have a doubt in the car or anything, I’m dead in the water. That’s the way I’ve always been. So that confidence is what I’m working on now. Just doing this little stuff here is building it, not even driving. I’m getting back in that routine that I’ve been doing for 20 years that I’ve been out of for five months.”

Earnhardt has been candid about sharing the steps of his rehabilitation with fans through social media and his podcast. Part of his treatment involved going to public places to see if anxiety would provoke his symptoms.

“Everywhere you go, you sort of have to relearn how to interact with people,” he said. “You’re apprehensive about everything. All you want to do is not go anywhere. And home is great. Home is comfortable. That’s your comfort zone.

“So when you go out into the world and seeing people you haven’t seen in five weeks or two months or four months that you used to see every week, it’s like ‘What do they think of me? What are they looking for, are they analyzing me?’ It’s not a lot of fun, that part of it.

“I’m nervous to go back to Daytona and see everyone that’s going to be there and everybody comes up and goes ‘How you feeling?’ Everybody asks you that. ‘I feel good! How do you feel?’ It’s just going through that process of sort of reintroducing yourself to everything is a bit frustrating sometimes. I do feel more and more confident every day. Getting back into doing my work and what I’ve been doing all my life is giving me a super good feeling.”

His recovery has been overseen by Dr. Micky Collins of the University of Pittsburgh Medical Center. Earnhardt said he expected NASCAR would sign off on his return if “Dr. Collins says everything is good” after the December test.

“He gives me the confidence that I’m going to be good, and he’s done it before,” Earnhardt said. “We came back from (missing two races with a concussion in 2012) and had a lot of success. I didn’t believe all that would be possible. I thought my winning days were over. I was trying to figure out how I was going to get through the rest of whatever, I was so miserable. We ended up coming back and had a lot of fun days.”

Hopefully, this positivie attitude will translate into Dale Jr. driving his hot rod into Victory Lane several times in 2017!

The Trucks Roll The Bones At Vegas

NXS Playoffs Get The Green Flag At Vegas