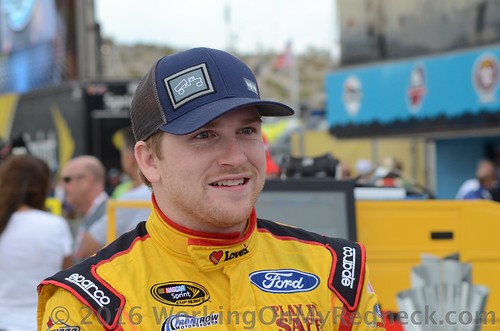 It is official that Chris Buescher will drive a second car for JTG Daugherty Racing in 2017, the team stated Tuesday.

“We can confirm at this time that JTG Daugherty Racing is currently in the process of starting a second team in the NASCAR premier series,” JTG Daugherty Racing team owner Tad Geschickter said in a statement. “We would also like to confirm and welcome Chris Buescher to the team as our driver for the second car. More details will follow.”

Said Buescher, 24, in a statement: “I can confirm that I have signed to race for JTG Daugherty Racing as they expand to a two-car team in the NASCAR premier series in 2017. I’m thankful for the opportunity and look forward to competing for a spot in the Chase. We’ll have more details at a later date.”

He won the 2015 Xfinity title for Roush Fenway Racing and drove last season for Front Row Motorsports. Buescher scored a win in his rookie Cup campaign.

He finished 16th in the points this season after making the Chase via his win at Pocono in August. Buescher finished with two top-five and two top-10 finishes.

His addition is part of JTG’s expansion. The team, which debuted in 2008, previously fielded only a single-car effort. Allmendinger has been with the team since late in the 2013 season. He finished 19th in the points this past season. Allmendinger and JTG Daugherty made the Chase in 2014 after winning at Watkins Glen.

This has been the hot topic for the last 10 days in the rumor mill!

RFR has made the expansion of JTG/Daugherty Racing to two full time race teams significantly easier with a charter lease and loaning out the young gun driver like Chris Buescher to drive the new entry for them!

All the while RFR will be contracting down to just two full time race teams for 2017.  This is a significant change for RFR, considering about a decade ago RFR would put five race teams on the track each and every week at the hight of their heyday!

Could be the beginning of the demise of Roush-Fenway Racing?

One Comment on “RFR Loans Out Buescher And Leases The No. 16 Charter To JTG/Daugherty Racing For 2017”