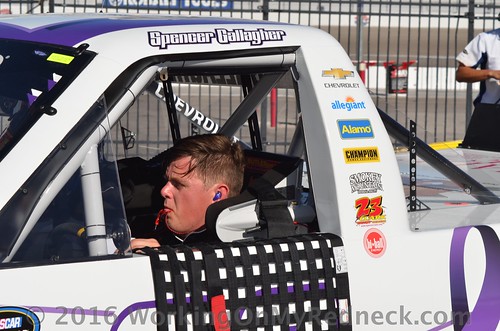 Spencer Gallagher drove the No. 23 Allegiant Travel Chevrolet to a 21st-place finish in Friday night’s Ford EcoBoost 200 at Homestead-Miami Speedway. This was Gallagher’s fourth career start at the mile-and-a-half track. After starting the 134-lap event from the fifth position, Gallagher reported that he was experiencing a tight-handling condition causing him to drop back into the ninth position when the first caution of the night occurred on lap 15. Gallagher brought the Allegiant Travel Chevrolet to pit road for four tires, fuel and a track bar adjustment to help loosen up the tight-handling chassis, returning to the field in the 14th position on lap 19. The Las Vegas native reported that he was experiencing a tight in and loose off feeling causing him to run in the top 15 until the final caution occurred on lap 111. Gallagher came to pit road for right-side tires and fuel to try and gain track position back, restarting in the fourth position on lap 114. Shortly after the restart Gallagher once again dropped back through the field, ultimately reaching the 21st position where he crossed the start-finish line.

“Tonight did not go as planned for the 23 team. However, GMS Racing has had a really successful year and I am so proud of what this team has accomplished. Congrats to my teammate Johnny Sauter for winning the Championship. I honestly can’t wait until next season.”