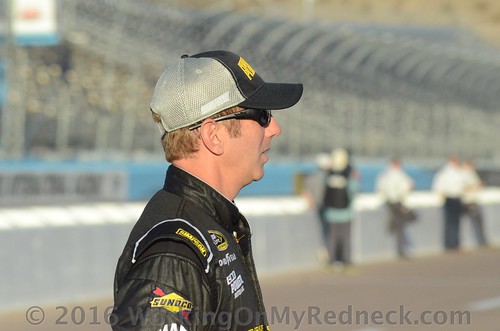 Greg Biffle announced on Monday that he and Roush-Fenway Racing have parted company effective immediately.

Over the last 19 seasons, the Vancouver, Washington native has amassed 19 wins, 13 poles, 92 top fives and 175 top 10s in Cup. His second-place finish in 2005 – the second season of the Chase – was a career-best. Since the Chase was introduced in 2004, Biffle has qualified seven times.

However, 2016 was a struggle for Biffle and the No. 16 team. Only once throughout the season was Biffle among the top 20 in the standings. Biffle looked like his old self when the second half of the season started at Daytona in July. He won the pole and finished eighth. At Kentucky, Biffle posted his second top 10 and earned his first top-five at Loudon the following week. However, this would remain his only top-five finish and Loudon the following week.

After the first 26 races, Biffle was 23rd in the standings and missed the Chase for his second consecutive season. Last month at Kansas Speedway, where Biffle had won twice prior, he acknowledged his plans were unclear for 2017.

“I just couldn’t do this anymore,” Biffle told the Times-Union. “I’ve been the one carrying the company banner. I’ve been the one who kept re-signing. I was all of those things. But it just didn’t get any better. I didn’t see a light at the end of the tunnel, so I decided I’d rather do something else – even if it means not driving anymore.

Biffle’s departure continues an exodus of the organization’s veteran drivers. Matt Kenseth left after the 2012 season, and Carl Edwards joined Kenseth at Joe Gibbs Racing in 2015. Stenhouse and Bayne have combined to win one Sprint Cup race.

Biffle said he doesn’t have any definite plans for next year, but he hopes to be in a competitive car.

“My passion is to drive a car that’s capable of winning,” he said. “If I had to bet, that’s what I’ll be doing next year.”

“I want to be competitive in races and run in the top-10,” Biffle said. “That is my goal and my focus. If I am not doing that, then I am probably going to do something different.”

Biffle finished 17th at Homestead-Miami Speedway on Sunday and 23rd in the standings.

Roush Fenway Racing has yet to decide whether it will continue to operate a third full-time team in 2017.