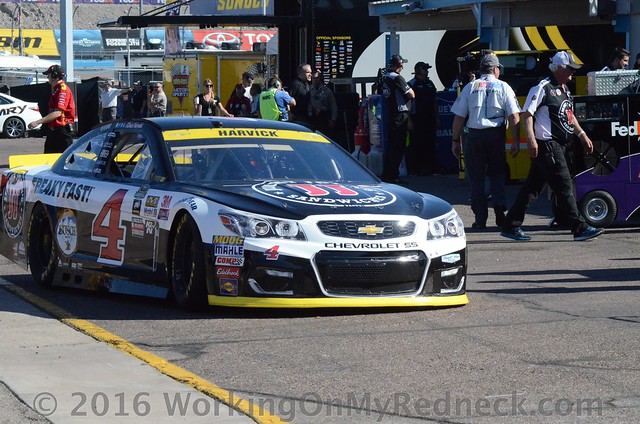 Kevin Harvick, driver of the No. 4 Jimmy John’s Chevrolet SS for Stewart-Haas Racing (SHR), battled hard all day to finish third in the NASCAR Sprint Cup Series finale Sunday at Homestead-Miami Speedway. It was his 17th top-five and 27th top-10 finish of 2016 and eighth top-five finish in 16 career Sprint Cup starts at Homestead.

Harvick started from the pole position and stayed at the front of the field for 79 of the first 86 laps before the handling of the No. 4 Chevrolet developed a tight-center, loose-off handling condition. He surrendered the lead to Carl Edwards but remained in the top-five the majority of the event.

The Bakersfield, California, native was racing in the third position by the halfway point, as the team continued to work on the handling of the racecar while the event moved from day to night and the track began to cool.

Harvick led three times for 79 laps to bring his season total to 1,384.

The 2014 Sprint Cup champion briefly fell as low as seventh by the fourth caution of the day on lap 208, but after a pit stop where the team continued to make adjustments, Harvick emerged in fourth. He fell back to fifth by the fifth caution of the night at lap 253, but after he came to pit road for four tires and fuel, he again returned to the racetrack in fourth.

Harvick avoided a nine-car accident on that lap-257 restart, which involved championship contenders and race leaders Edwards and Joey Logano. The accident brought out the sixth caution of the day and allowed the No. 4 car to restart second on the outside of the front row. Harvick fell to fourth on the lap-263 restart before the No. 17 brought out the final caution of the night on lap 264.

The No. 4 team elected to stay out during the caution and restarted fourth for the overtime attempt. Harvick battled to the end of the race and finished third at the checkered flag.

“I’m proud of everyone on my Jimmy John’s team and every person that’s prepared my cars this year,” said Harvick, who won the Sprint Cup race at Homestead-Miami Speedway in 2014 to clinch his Sprint Cup championship. “We fought to the very end and tried to close out the season with one last win. I have to thank Jimmy John’s, Busch beer, Mobil 1, Outback, ditech, Hunt Brothers Pizza, Morton Buildings, Bad Boy Off-Road and all our great partners.

“I also have to say thanks to two great partners who played a major role over the course of my career: Chevrolet and Sprint. They were so good to us for such a long time, and I can’t thank them enough for their support. We finished strong, and we’ll be back in 2017 to try and make another run at a championship.”

Danica Patrick, driver of the No. 10 TaxAct Chevrolet SS for SHR, finished 19th.

Kyle Larson finished .466 of a second behind Johnson in the runner-up spot, while Harvick, Logano and Jamie McMurray rounded out the top-five. Kyle Busch, Matt Kenseth, AJ Allmendinger, Denny Hamlin and Michael McDowell comprised the remainder of the top-10.

The 2017 season kicks off Feb. 18-26 with the traditional Speedweeks at Daytona (Fla.) International Speedway. The 59th Daytona 500, the first points-paying race of the season, is scheduled for Feb. 26 and will be broadcast live on FOX.