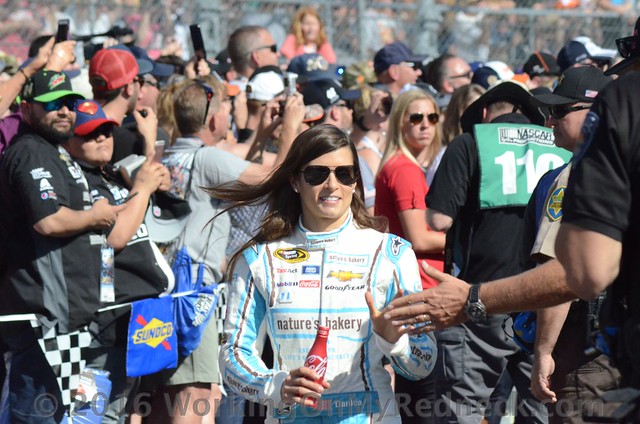 Patrick started Sunday’s race from the 30th position. After jumping up to 25th on the initial start, she faded back to 32nd before the caution flag waved for the first time at lap 26. She noted the car’s handling was “tight center and loose off,” so crew chief Billy Scott called for a four-tire stop with wedge and air pressure adjustments.

Fast work by the No. 10 TaxAct Chevy pit crew put Patrick in the 28th position for the lap-31 restart. While she went a lap down to the leader on the following long green-flag run, Scott called for Patrick to take the wave-around when the caution flag waved again at lap 79, which put her back on the lead lap in 24th.

Patrick noted brake issues early in the race, but the team was able to pull tape to help alleviate the problem. She continued to run inside the top-30 and noted the car was “just unstable” with 100 laps to go.

As the laps wound down to less than 40 to go, Patrick was scored in the 25th position, and when the caution flag waved with 10 laps to go, she was 27th. After a lengthy red flag for officials to clean up the track after a multicar incident, Patrick took the green flag running 21st. In the closing laps, she was able to pick up two spots and finish 19th.

“Today was another reminder of why you don’t give up,” Patrick said. “We’ve had some tough races this year, but my guys have never given up. I’m so proud of everyone on the No. 10 TaxAct Chevy team for all of their hard work all season. They put in so much effort every single weekend. The tough days are character building, and they’ve definitely made us stronger as a team this year, and I know we’ll carry that strength into next season.”

Tony Stewart, driver of the No. 14 Always a Racer/Mobil 1 Chevrolet SS for SHR, finished 22nd in his final Sprint Cup start.

Kyle Larson finished .466 of a second behind Johnson in the runner-up spot, while Harvick, Joey Logano and Jamie McMurray rounded out the top-five. Kyle Busch, Matt Kenseth, AJ Allmendinger, Denny Hamlin and Michael McDowell comprised the remainder of the top-10.

The 2017 season kicks off Feb. 18-26 with the traditional Speedweeks at Daytona (Fla.) International Speedway. The 59th Daytona 500, the first points-paying race of the season, is scheduled for Feb. 26and will be broadcast live on FOX.