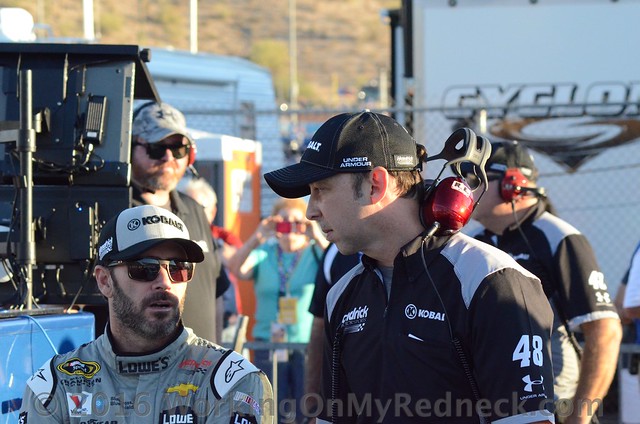 Call him driven, call him Superman, call him whatever you may, but you should most deifintely call him Mr. Seven-Time!

“You’re a good man, you’re a great champion, and now you’re a seven-time champion,” crew chief Chad Knaus radioed to Johnson, who grabbed the lead from Kyle Larson through Turns 1 and 2 during the first and only attempt at a two-lap overtime.

Johnson pulled away to win by .466 seconds. Polesitter Kevin Harvick ran third, followed by Championship 4 contender Joey Logano, who finished second in the final standings on the strength of his fourth-place run.

“Oh, my gosh, there is no, no way on earth,” said Johnson, who picked up his first victory at Homestead, his fifth of the season and the 80th of his career. “Just beyond words. Just didn’t think the race was unfolding for us like we needed to be the champs, but we just kept our heads in the game. Chad called a great strategy, made some great adjustments for the short runs.

“Luck came our way and we were able to win the race and win the championship. So grateful for the opportunity, and so thankful and blessed. I am at a loss for words.”

Until the closing laps, Johnson seemed the least likely of the four finalists to win the championship. Carl Edwards was leading on Lap 252 of a scheduled 267 when Dylan Lupton’s contact with the Turn 2 wall caused the fifth caution of the race.

On the subsequent restart, Edwards tried to block Logano into Turn 1, and the resulting nine-car wreck left Edwards’ No. 19 Toyota crippled against the outside wall. The wreck knocked Edwards out of the race and left him fourth in the final standings.

Kyle Busch restarted next to Johnson on the inside of the second row on Lap 263—after the accident that ended Edwards’ night—but Logano, who had pitted for fresh tires on Lap 260, surged forward as Busch slipped back.

Larson, who led a race-high 132 laps, held the top spot with Johnson in second and Logano closing in third when Ricky Stenhouse Jr.’s Ford nosed hard into the inside wall off Turn 2 to cause the seventh and final caution on Lap 263.

On the ensuing overtime restart, Johnson started second to the inside of Larson, and cleared the No. 42 Chip Ganassi Racing Chevrolet through the first corner. Logano slipped to fourth and out of the championship picture.

“That last restart, I was hoping to get Jimmie there and trying to get either to the inside or outside of him,” Logano said. “I just timed it a little bit wrong to get underneath him. I bumped him at the start/finish line, and I just didn’t have enough time to get under him.

“We lost some time there, and unfortunately we finish second. The championship means so much and everyone forgets about second place. That’s what stinks. But overall I’m proud of this team. This will be motivation for next year. This hurts.”

Busch restarted 13th in the overtime after pitting for fresh tires, charged up to sixth over the final two laps and finished third in the championship standings.

“All in all, we fought hard tonight,” said Busch, the defending series champion. “We gave it everything we had. We didn’t come in here with the greatest race car today, but we knew that we had enough of a one that we could run with those guys, and we showed that when the lights came on.

Johnson, who didn’t lead a lap until he beat Larson to the stripe on the final restart, had to overcome more than his share of adversity to reach his holy grail. In the first place, he surrendered his 14th-place starting position and took the green flag from the rear of the field after NASCAR discovered unapproved modifications to the “A” posts of the No. 48 Chevy during pre-race inspection.

By the time the first caution flag waved on Lap 27, however, Johnson had driven up to 17th place. But less-than-stellar pit stops kept him mired in traffic behind the other three championship contenders for the majority of the race—until an adjustment under caution on Lap 172 brought his car to life.

Check out the unofficial results of the Ford EcoBoost 400 at Homestead-Miami Speedway.

We have a new Sheriff in town my friends!