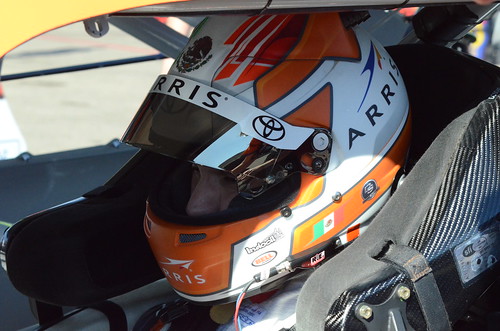 It’s been a rapid rise for Suárez, who captured the 2016 NASCAR XFINITY Series championship Saturday at Homestead-Miami Speedway by winning the Ford EcoBoost 300 in only his second full-time season of NASCAR national series racing. The driver of the No. 19 Joe Gibbs Racing Toyota is the first Latin American, as well as the first graduate of the NASCAR Drive for Diversity program operated by Rev Racing, to win a NASCAR national series title.

To take home the crown in “The Series Where Names Are Made,” Suárez, 24, outlasted his Championship 4 competitors Elliott Sadler (third), Justin Allgaier (sixth) and Erik Jones (ninth).

It was a year of firsts for Suárez, who burst onto the NASCAR XFINITY Series scene last season by earning its Sunoco Rookie of the Year Award and finishing fifth in the championship standings. In his sophomore campaign, Suárez became the first Mexico-born driver to win a NASCAR national series race (June at Michigan) and to lead the points standings in a NASCAR national series.

The Monterrey, Mexico, native dazzled from the outset of the season, racking up four top-five and nine top-10 finishes in his first 10 contests. Suárez led the points standings following 14 separate races in the regular season and made his way into the NASCAR XFINITY Series Chase with his win at Michigan.

Once the Chase started, Suárez upped his performance to another level. He breezed through the Round of 12 with a win at Dover, sandwiched between a runner-up result at Kentucky and a third-place finish at Charlotte. Then, Suárez registered finishes of third (Kansas), fifth (Texas) and fifth (Phoenix) to set up his championship-clinching victory at Homestead.

Also on Saturday, Erik Jones won the Sunoco Rookie of the Year Award in the NASCAR XFINITY Series, a season after accomplishing the feat in the NASCAR Camping World Truck Series.

Check out the unofficial results of the Ford EcoBoost 300.