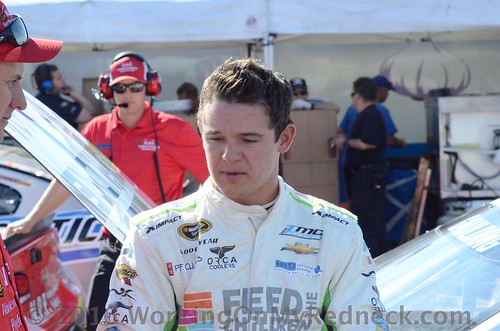 It appears that you can add Gray Gaulding to the list of drivers who will compete full-time in NASCAR’s premiere series in 2017.The 18-year-old driver has reported that he will be a candidate for rookie-of-the-year honors next season.“Our plan is to run full-time in the Cup Series,” Gaulding said. “I’m really excited about [it]. We’ll probably announce in the next couple weeks, the sponsor and the manufacturer, so got a lot of good things rolling, but you should see me full-time next year in the Sprint Cup Series.”Gaulding said “the plan right now” is to run the No. 30 car next season for The Motorsports Group.

Gaulding has competed in two Sprint Cup races this season and will be back in TMG’s No. 30 car for the season finale at Homestead-Miami Speedway.“It’s all about me getting experience and doing the best that I can to learn as much about these cars so next year when we run full-time, we’ll be a threat, hopefully for the top-20, top-15 and top-10; just getting better, week in and week out,” he said.In total, Gaulding has run in 13 NASCAR Camping World Truck Series races, two XFINITY Series races and two Sprint Cup Series races.