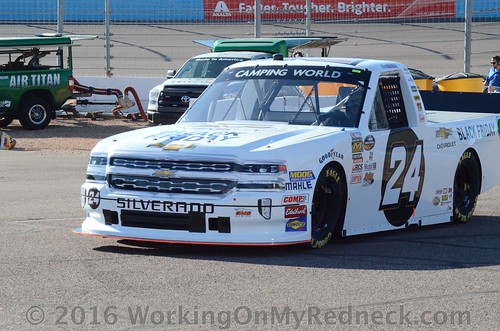 Kaz Grala drove the No. 24 Black Friday Chevrolet to a 28th-place finish in Friday’s NASCAR Camping World Truck Series (NCWTS) Lucas Oil 150 at Phoenix International Raceway. Kaz qualified in the 11th-position after advancing to the final round of qualifying earlier in the day. The 17-year-old reported to the Jeff Stankiewicz-led team that he was experiencing a tight-handling condition. Running in the top 15 until the fifth caution of the night occurred on lap 65, Kaz brought the No. 24 Black Friday Chevrolet to pit road for four tires, fuel, air pressure and wedge adjustment, returning to the field in the 16th position. Kaz was battling for the 15th position when he was involved in an incident with another competitor on lap 78, bringing out the sixth caution of the night. The Boston, Mass., native was relegated to a 28th-place finish in his first start at the one-mile track.

KAZ GRALA QUOTE:
“I wasn’t expecting tonight to end like it did. I was battling a tight chassis and it got a little better there towards the end. Jeff (Stankiewicz, crew chief) and the No. 24 crew did a great job all weekend. I wish we could have brought home a better end result.”

NEXT RACE:
The NASCAR Camping World Truck Series returns to the track on November 18 at Homestead Miami Speedway.