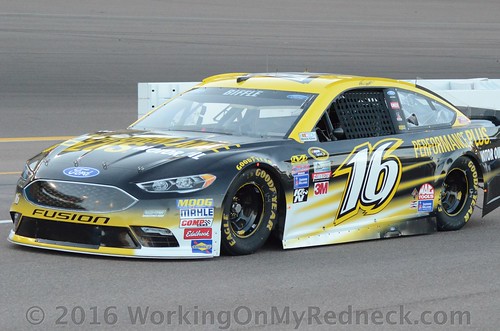 Greg Biffle made his 500th consecutive start Sunday at Phoenix International Raceway.  Biffle was looking at a solid top-10 finish until damage to the nose on a restart sent him to pit road for repairs.  Biffle was able to keep his No. 16 Performance Plus Motor Oil Ford Fusion on the lead lap the entire race and in the end survived two green-white-checkered overtime restarts to cross the finish line 16th.

Biffle started the race from the 24th position and was quiet over the team radio on the opening green flag run as he worked his way forward.  A caution was displayed during the round of green flag stops and Biffle had yet to pit.  Biffle benefitted from the caution and found himself inside the top 10.

Biffle held his ground in the top 10 until the halfway mark when he developed a loose handling condition and was struggling for turn.  Biffle took the lap 219 restart 16th, but the No. 3 stalled in front of him on the track.  Biffle got into the back of the No. 3, causing a hole in the nose of his Ford.  Biffle visited pit road for repairs prior to the field going back to green and then took the ensuing restart from the 17th position.

A pit road penalty on the next stop cost Biffle another valuable position on the track.  Despite the repairs and penalty Biffle was able to stay on the lead lap and pick up positions over the two green-white-checkered restarts in the end.  Biffle took the final overtime restart from the 18th position and was able to work his way up to 16th for the checkered flag.