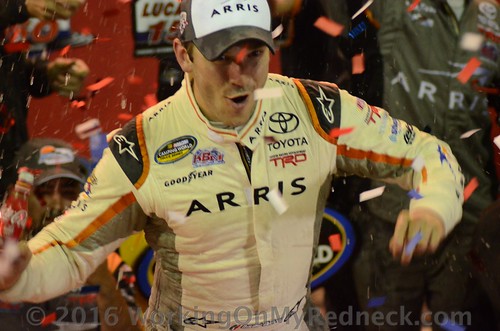 When the engine in Byron’s No. 9 Toyota expired on Lap 141 of 150 – ending the championship run for the series’ most prolific winner this year – Kyle Busch Motorsports teammate Daniel Suarez took over the race lead and went on to score the first NCWTS victory of his career.

Suarez pulled ahead of Sauter after a restart with four laps left and led by .510 seconds when he crossed the finish line for the final time.

“He was running a perfect race and things like this happen,” Suarez said of the demise of his teammate, who had led 112 of the first 137 laps before his engine began to fail. “The first victory in any series is always the most difficult to get.

“I’m just very proud of this team for their effort. They’ve done a really good job all year. I’m very happy that we were able to get the win for KBM and Toyota.”

“We had been running hot a little bit the last run – kind of all night,” Byron said. “It stayed within 10 (degree) range, but it started to vibrate, maybe the lap before… but it didn’t seem like a big deal, then it sputtered and flames came out from underneath the truck.”

And now Bell will race for the championship instead of the 18-year-old Byron, who has posted a series-best six victories in his rookie season.

Seeking a sweep of the Round of 6 after victories at Martinsville and Texas, Sauter couldn’t catch Suarez in the four-lap run to the finish.

“We had a great truck, especially on the long runs,” said Sauter, whose No. 21 Silverado is the only Chevrolet in the Championship 4. “Unfortunately, I just could not get going in the short run. I was just extremely loose… “I knew at the end there I needed to get a really, really good restart, and I didn’t get the restart I needed. I’ve got nobody to blame but myself for that. But I’m just proud of everybody’s effort. We just needed to keep pushing. Even though everybody says there’s no pressure, there’s always pressure – this is racing.” Crafton and Peters were one point apart entering the race and battled in close quarters for most of the race. Until Byron’s engine blew, they were contesting the final position at Homestead until Bell fell back on a late restart.

“There wasn’t a lap that wasn’t tense,” Crafton said. “We just raced hard from the beginning to the end.”

Editor’s note:  From the drop of the green flag William Byron ‘s Toyota was strong!  There was no doubt that nobody, and I mean nobody, had anything for the winningest driver in the CWTS this year.  That KBM Toyota was in a different zip code for most of the race Saturday night.

I recall an old motorhead saying that goes something like this:  The fastest your race car will ever go is just before the motor grenades!  The proof was in the pudding last night at PIR as William Byron’s truck dominated and smoked the field until he went up in smoke, himself!  Not only did the blown motor end Byron’s chances of winning the race, but it took him completely out of the racing next Friday night for the 2016 CWTS championship!

Check out the unofficial results of the Lucas Oil 150.