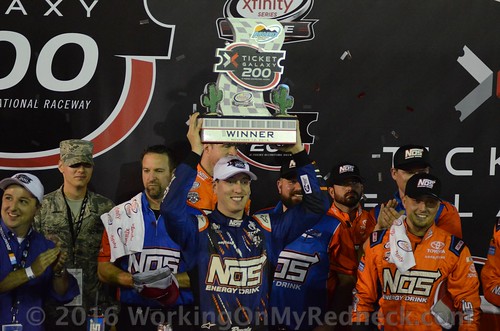 It was just another routine extraordinarily dominating Saturday at Phoenix International Raceway for Kyle Busch.

But nothing else in the Ticket Galaxy 200 was at all ordinary.

All the drama unfolded behind Busch, as eight drivers scrambled for four positions in the NASCAR XFINITY Series Chase’s Championship 4 Round at Homestead-Miami Speedway.

Busch led 190 of 200 laps on the way to his 10th NASCAR XFINITY Series victory of the season, his 10th at the one-mile track and the 86th of his career, extending his own series record.

“It means a lot,” said Busch, who won his 170th race across NASCAR’s top three touring series. “That’s what we set out to do tonight, and we’ve been really fast here at Phoenix.

“We’ve had some great race cars and Chris Gayle (crew chief) and all these guys do such a great job each and every week preparing these things – and it’s fun to win here.”

Justin Allgaier and Daniel Suarez secured spots in the Championship 4 with respective fourth and fifth-place finishes, as did Erik Jones, who recovered from a pit road mistake on Lap 93 to finish 10th.

But the real tension waited until after the race, when Elliott Sadler sat anxiously on pit road as NASCAR officials decided whether loose lug nuts would cost Sadler, the 13th-place finisher, the services of his crew chief, Kevin Meendering, in the season finale.

NASCAR found two loose lug nuts, and that means Meendering will serve a suspension next week. Sadler did not know who his crew chief will be at Homestead – though he was lobbying, somewhat facetiously, for team owner Dale Earnhardt Jr. to take over the pit box.

“The emotions of the last 30 minutes have been tough,” Sadler said. “We knew one was loose, and one was in question. Kevin’s pretty much become my best friend, and Kevin’s made me a race car driver again this year…

“We’ve saved our Darlington car – our best car – for Homestead. We’ve put all our eggs in that car. We’ve done everything right as a race team to go to Homestead with a legitimate shot of walking away a champion… Now that we know he’s going to be suspended, it’s going to be tough.”

NASCAR XFINITY Series Managing Director Wayne Auton said there was never a possibility of Sadler losing his spot in the Championship 4.

“At the end of the race, we bring all the cars down to the entrance of pit road for inspection of the wheels and the lug nuts,” Auton said. “We observed that the No. 1 car had two lug nuts not secured to the wheel. With that being said, all the teams were very much aware at the start of the Chase of the violations that could come about.

“We’ve advised the team that they’re going to be looking for a crew chief for next week and a monetary fine of about $10,000. It’s clearly in the 2016 NASCAR Xfinity Series rule book.”

Blake Koch finished eighth and lost the final Championship 4 position to Sadler by four points. Joining Koch on the Chase sidelines were Ryan Reed, who finished sixth, and Brendan Gaughan and Darrell Wallace Jr., who were wrecked and eliminated before the race was 150 laps old.

Gaughan, who needed a victory to advance to Homestead, was playing fuel strategy when his right front tire went flat on the frontstretch on Lap 138. Gaughan pounded the Turn 1 wall and retired in 35th place.

“It was about to play out the way we wanted,” Gaughan said after exiting the infield care center. “Did not want to be the caution. Did not want to hit that hard – but we took a shot.”

Wallace’s grandmother had passed away during the week before the race, and the No. 6 Ford carried her name, “Granny Jan,” above the driver’s door. On Lap 148, Koch ducked to the inside off Turn 4 and knocked Wallace’s Mustang into the inside frontstretch wall.

“My grandmother was giving me the ride of my life,” Wallace said, his voice breaking with emotion. “That was the most fun I have had all year. Just circumstances took us out. It’s just hard. Thanks, Granny, I love you. We will go on to Homestead and let her ride again.”

Check out the unofficial results of the Lucas Oil 200.