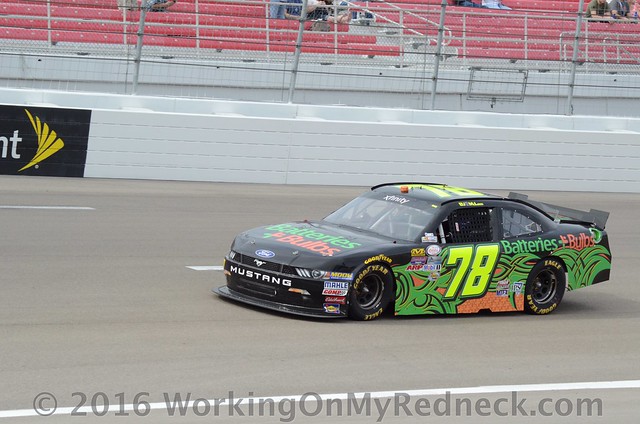 No matter what happens in the next two NASCAR XFINITY Series (NXS) races at Phoenix International Raceway and next weekend’s season-finale at Homestead-Miami Speedway, B.J. McLeod has no regrets.

While McLeod can’t predict how his No. 78 B.J. McLeod Motorsports Ford Mustang will perform over the next two weekends, McLeod is hoping for strong finishes that will his give his Mooresville, North Carolina-based team some momentum heading into the off season and 2017.

“It’s hard to imagine that 2016 is really coming to a close,” said McLeod. “We had a really good car at Texas last weekend, just got botched on some strategy that worked against us. Our finish wasn’t an indicator of our performance – but for me that’s encouraging not only for Homestead, but I’m anxious to get back to Phoenix this weekend and see what we can do.”

In March, McLeod finished 29th at the 1.0-mile oval in the desert and while that finish wasn’t at all satisfying, McLeod expects bigger and better things in Saturday afternoon’s Ticket Galaxy 200.

“Our short track program has been our strong suit in 2016 and we plan to showcase that this weekend at Phoenix,” McLeod added. “My team led by crew chief David (Ingram) have taken great pride knowing that we can make some of our biggest deficits at some of the smaller tracks.

“We’ve proven that time and time again this year. We hope to prove that again on Saturday afternoon. I like Phoenix. It’s a cool place with a unique layout and a heck of a dogleg. The ones that really win at Phoenix are the fans – because Phoenix really can provide some great racing.”

With that great racing opens an opportunity for success. McLeod, a native of Wauchula, Florida opes to take advantage of any open door opportunities in 200 laps of racing Saturday afternoon.

“A top-20 finish would be awesome, but something around there we would be happy with too,” added McLeod. “It’s a race within a race for us. We’re out there striving to get the best finish possible each and every week – but focused on maintaining our spot inside the top-20 in the point standings.

“A good run on Saturday will help that cause for sure.”

In addition to McLeod, B.J. McLeod Motorsports will field a third car this weekend at Phoenix with former XFINITY Series champion Jeff Green aboard the No. 99 Ford Mustang.

“I’m excited to work with D.J. this weekend,” said McLeod. “He has a lot of experience in NASCAR and I think he can join our team this weekend and do a real good job. He has achievable and manageable goals and we’re going to do everything we can as one team to make sure we can put all three of our cars in position for a solid finish.

“Jeff (Green) did a phenomenal job for us at Kansas. I know he’s coming to Phoenix to do that again and no doubt he can be a good ear for all of us at B.J. McLeod Motorsports to make sure the weekend is one to remember,” McLeod concluded.

Veteran industry crew chief George (David) Ingram Jr. will call the shots for the No. 78 B.J. McLeod Motorsports Ford Mustang for the 32nd race of the 2016 NASCAR XFINITY Series season.

Marketing partnership opportunities are available for the No. 78 Ford Mustang for the remainder of the 2016 and 2017 NASCAR XFINITY Series seasons. Interested inquiries are encouraged to contact pr@bjmcleodmotorsports.com.