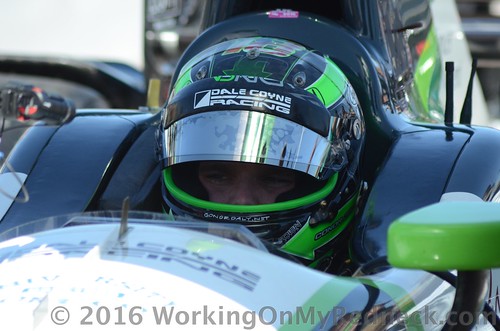 When A.J. Foyt tested Conor Daly at Sebring back in 2012, he was immediately impressed.

“I told him we made a change to the car but we never touched it and after a couple laps he came back in and I asked him how it felt,” recalled Foyt in a conversation after that test. “He said he really couldn’t feel any difference and I knew right then that boy had a good head on his shoulders.”

And now that combination of experience and youth will be partners in 2017.

Daly got the word last week he was going to be the driver of the No.41 car for A.J. Foyt Racing next season and an official announcement is expected within the week.

The 25-year-old native of Noblesville, Ind. made his IndyCar debut for A.J. in 2013 at Indianapolis and will replace Jack Hawksworth in one of the ABC Supply Specials following an impressive rookie season with Dale Coyne in 2016. Daly scored a podium a Detroit (second), ran fourth at Watkins Glen and finished sixth three times last season while also leading 56 laps.

A winner in Star Mazda, Indy Lights and GP3, Daly struggled on ovals last year but that figures to change under the tutelage of Indy’s first four-time winner.

“He’s a good racer and I think we could help him on the ovals if he came here,” said Foyt last month.