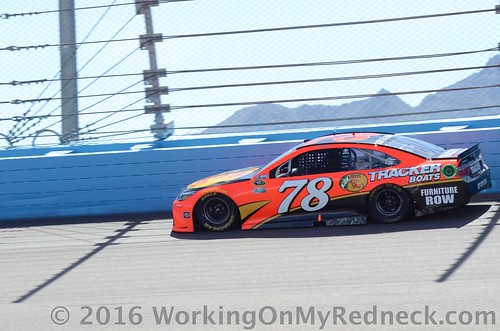 The last two times Martin Truex Jr. competed at Texas Motor Speedway his Furniture Row Racing car was contending for the win. But in the late stages of each race he saw his chance for a Victory Lane visit slip away.

Just when Truex took the lead with 17 laps remaining in the 2015 Chase race at the 1.5-mile oval, he was struck with a double whammy – a power steering failure and a loose right-front wheel. However, he did battle through the problems – running at 70 percent — to bring home an eighth-place finish.

Five months later at the Texas track in Fort Worth, Truex had the dominant car, leading the most laps (141), and at times enjoying an eight-second lead on the field. But pit-road strategy to forego fresh tires late in the race didn’t play in his favor and he ended up finishing sixth.

Truex, who has claimed four wins, five poles and has led the most laps (1,743) this season, is hoping the third time will be the charm in the Lone Star state when he drives the No. 78 Bass Pro Shops/TRACKER Boats Toyota in Sunday’s AAA Texas 500 Sprint Cup Series race.

“We let a couple of races get away from us at Texas but feel that we can once again contend for the win,” said Truex. “We need to close the deal there. I love Texas Motor Speedway. The speed, the bumps, the slickness of the track and cars sliding all around. It reminds me of Atlanta, which is also one of my favorite tracks.

“The way we race, Texas is a good fit for our team. I feel like it owes us one and that’s why we’re going back there with plenty of confidence and a fast Bass Pro Shops/TRACKER Boats Toyota.”

Truex will be seeking his fourth straight top-10 at Texas Motor Speedway. His career totals at the Fort Worth track are: 22 starts, two top fives, 11 top 10s, two poles and 373 laps led.

Regarding his performance last week in Martinsville, Va. Truex proved that being eliminated in the Chase did not deter the team’s attitude. Five days after being knocked out of NASCAR’s playoff format, Truex secured the top qualifying spot, his second consecutive pole-winning performance. He went on to finish seventh in the 500-lap Martinsville race and led the second most laps (147).

“Coming back like we did after what happened in Talladega the week before shows the true character of this team,” said Truex. “You can’t turn back time and you can’t change the past. I felt all year like this was a championship caliber team and we should be there (Chase). Winning is important, we won two races in the Chase, but we’re not in it anymore and we have to face that reality. The rules are the rules and that’s the way it was set up when it started. All we can do now is do the best we can.”