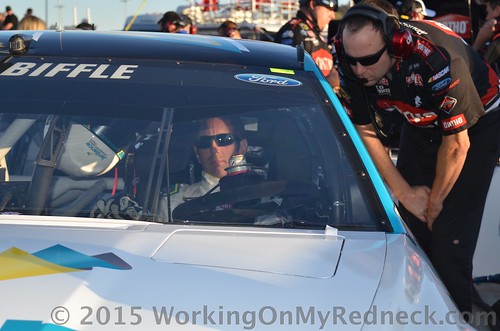 In his 25 career Cup Series starts at the 1.5-mile track, Greg Biffle has two wins, eight top-five and 13 top-10 finishes.  His average starting position is 12.9, with an average finishing position of 15.8.

Biffle has led a total of 733 laps at Texas Motor Speedway, making Texas his best track for laps led.

Earlier this Season at Texas

Greg Biffle started off Saturday evening’s race at Texas Motor Speedway from the 14th position in his No. 16 Ford Fusion.  The team made different chassis and air adjustments during the race in an effort to find grip and just as they were making gains on-track contact from another car sent Biffle into the outside wall.  Biffle’s evening was cut short and the accident resulted in a 39th-place finish.

Biffle started the race 12th in his No. 16 Ford Fusion, but a flat right front under green cost him valuable track position.  The unraveling tread also caused a hole in the cowl cover of his hood and created handling issues for the rest of the race, contributing to a 19th-place finish.

Robert Best, the underneath mechanic on the No. 16, is originally from Dallas, TX.

“I really enjoy racing at Texas. It’s been a good track for me in the past and I feel like we’ve made some positive changes with our cars.  Texas will be a good place to take what we’ve learned so far this season and see what we’ve got.”

I AM STILL WORKING ON MY REDNECK!