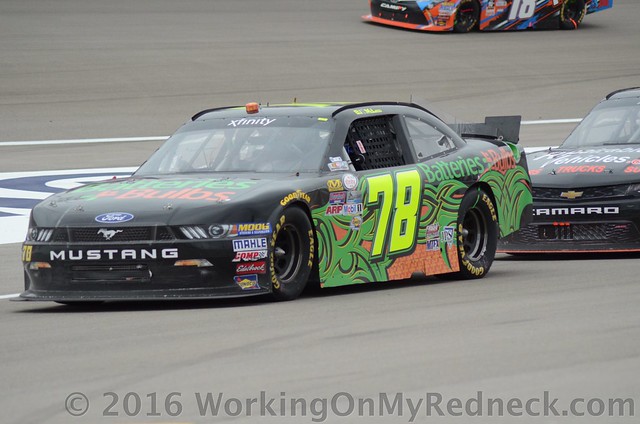 After a much needed two week break from competition, McLeod and his B.J. McLeod Motorsports (BJMM) team return to the track recharged and refreshed, but more importantly looking to end their 2016 season on a high note.

“The break was nice, but we’re ready to get back after it and make the best of the final three races of the season,” said McLeod. “The downtime really allowed us to work hard on the cars and give the guys some much needed time at home, but everyone’s eager to get back after it this weekend.”

The two-week rest also offered the team an opportunity to work especially hard on their immediate program, with two of the final three races made up of tracks at 1.5-mile in length.

“We’ve been steadily making gains in our program throughout the year, I think everyone’s seen that,” added McLeod. “We’ve been able to have some of our best performances on the short tracks, but we hope to do that at some of the bigger places too here at the end of the year.

“Texas and the last race at Homestead are really some big races mixed with a lot of fast race cars, but we’ve spent countless nights tweaking on our intermediate cars and I know we’ll be able to come to Texas this weekend and be better the second time around.”

Pure proof of the team’s ability to improve on their mile-and-a-half program circles back to the most recent race at Kansas Speedway last month, where McLeod recorded a 22ndplace finish, a track with similar characteristics to Texas.

“Kansas was a good weekend for us,” recalled McLeod. “We took three cars and all three finished the race. Jeff (Green) did a great job by leading the organization with a 21stplace run. There’s still more work to do though. The good thing is that we’re going in the right direction and we have some momentum from Kansas that we can carry to Texas.

“At this point late in the game, momentum is everything, so we’ll go to Texas and see if we can’t have a similar outcome.”

McLeod, who will make his 74th career NASCAR national series start this weekend welcomes back Clint King to the No. 15 Warehouse Design Inc. / J&L Wire Ford Mustang for 200 laps Saturday afternoon at Texas. King, a former ARCA competitor will make his third career XFINITY start and first at Texas.

“We’re glad to have Clint back behind the wheel of one of our cars this weekend,” said McLeod. “He did a really good job at Charlotte last month and his learning curve in these XFINITY cars is continuing to accelerate nicely. Texas is a little different than Charlotte, but all the same concept.  We’ll work hard all weekend long to make sure we have both cars as competitive as possible for the race.”

Veteran industry crew chief George (David) Ingram Jr. will call the shots for the No. 78 B.J. McLeod Motorsports Ford Mustang for the 31st race of the 2016 NASCAR XFINITY Series season.

Marketing partnership opportunities are available for the No. 78 Ford Mustang for the remainder of the 2016 and 2017 NASCAR XFINITY Series seasons. Interested inquiries are encouraged to contact pr@bjmcleodmotorsports.com.