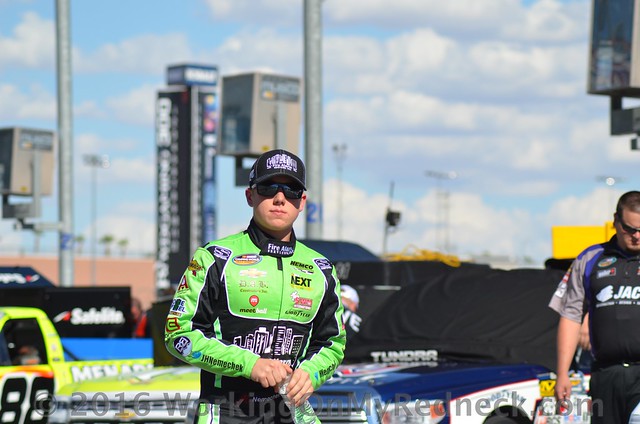 We recently were able to connect with one of the young and upcoming stars of the Camping World Truck Series, the second generation driver and son of “Front Row” Joe Nemechek, John Hunter.  After our introduction and exchanging of pleasantries we began this exchange of questions and answers.  It is our intention that when you finish reading this interview that you will have an in – depth understanding of what makes John Hunter Nemechek tick.

WorkingOnMyRedneck:  Your family has been involved in auto racing for many years, when did the racing bug hit you, you know when did you decide that you wanted to race cars?

John Hunter Nemechek:  I was probably 13 years old when I decided that I wanted to race.  I got my first go kart when I was 3 years old, I got my first moto cross bike when I was 4 years old.  So I started racing go karts and quarter midgets when I was 5 years old, and I transitioned into motor cross stuff for a while. Then I decided that I wanted to get back into stock cars where it was a little safer!  So that decision made me think about what I really wanted to do.  I grew up playing other sports is school while I was still racing, and I always came back to racing because it was the most fun.

WOMR:  How influential was your dad, Joe Nemechek, in your decision?

JHN:  Well, if you ask him now he would rather that I have a set of golf clubs.  It is way less expensive, I should say! (he chuckles with that retort)

WORM: What are your interests away from the race track?

JHN:  I do a lot of cycling, working out, and being active.  It’s kind of a little bit of everything, I should say.  But most of all, through a weekly basis we are out on our mountain bikes, road cycling and out on our scout bikes.  Also,  I am working out in the gym being in the shop, working on our cars.  I love getting my hands dirty.  I am not one that likes to sit back and watch everyone work.  So I love to be able to jump in and turn wrenches and have fun with the guys.

WOMR:  What are your goals and  would make this a very successful year for you?

JHN:  Well, we haven’t met our goal of how many races that we wanted to win this year!

WOMR:  Well, how many wins is that?

JHN:  I can’t tell you!  (He coyly chuckled with that anwer)  I will let you know when we get to that point! But we have been working hard on all of our equipment, and we need to put some strong runs together.  Obviously our first goal is to make it to the second round of the Chase.  The second goal is to make the second cut and make it to Homestead and be in that final four. This year was all about coming out, show them what we could do and seeing what we could do, seeing how many wins we could get, and competing for that championship.

WOMR:  Since this is a family operation, NEMCO, how involved are you in the daily operations?

JHN:  I am at the shop everyday and everyday I am working with the guys.  I love getting my hands dirty, like I said.   I love being at the shop with the guys, help making the decisions on what setups we are going to run, being in the machine shop making parts, and drawing parts for guys.  I enjoy bouncing ideas off of the guys to see if this idea will makes us faster.  We have our own CNC machine shop so I can go program our computers, make a part in a couple of hours, and then put it on our truck.  It is definitely a fun thing to be able to do.  And having dad there, he is a great machinist and a great engineering mind, and I have been able to learn a lot from him.

WOMR:  Where do you see yourself in five years?

JHN:  I hope to be at the Sprint Cup level!  That is the ultimate goal.  Who knows how long it is going to take or what is going to happen.  We are taking it day by day, trying to make the best out of every opportunity that we get.

WOMR:  Do you have anything on the drawing board for next year that you can talk about?

JHN:  We have been working hard on a lot of deals trying to get some stuff done for next year, but nothing yet.

WOMR:  Was your first NASCAR victory as good as you thought that it would be, or better?

JHN:  The first one was definitely better!  Then be able to win at Atlanta was even better yet from the standpoint of knowing that, afterwards, we were locked into the Chase.  That was definitely a great feeling.

WOMR:  I know that you are only 19 years old, but what has been the highlight of your 19 years, so far?

JHN:  Definitely being able to get to Victory Lane in one of the three top series in NASCAR.  Being able to win the Camping World Truck Series last year at Chicago was special.  Then being able to back that up this year with two more wins has meant a lot to me and our whole team.  That shows that we can go out and compete against the bigger teams with the little team that we have.

After spending a little time with John Hunter Nemechek doing this interview there are a few conclusions that can be made. First, and foremost,  John Hunter comes across as a very intelligent and polite young man.  Kudos to his parents, “Front Row” Joe and Mrs. Nemechek.  Secondly, John Hunter appears to be focused on the big prize, learning all he can about his chosen profession, applying all that he has learned, and cultivating the needed skills to rise through the ranks of NASCAR, and becoming the best at his craft.

For those race fans that are not that familiar with the NCWTS sensation, John Hunter Nemechek, WOMR suggests that you keep you eyes on, and ears open, for this young gun. Nemechek has the talent and the desire, and with just the right car owner/backing, he could very well be a Sprint Cup star in the near future.