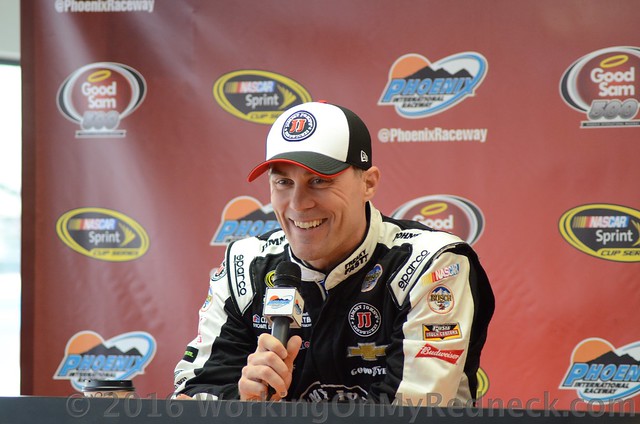 Kevin Harvick, driver of the No. 4 Busch Light Chevrolet SS for Stewart-Haas Racing (SHR), raced as high as third before he suffered a pit road penalty and had to battle back during a long green-flag run to finish 20th in Sunday’s Goody’s Fast Relief 500 NASCAR Sprint Cup Series race at Martinsville (Va.) Speedway.

Harvick started from 20th position and raced his way inside the top-five by lap 73 and up to third by lap 103.

The 2014 Sprint Cup champion came to pit road under caution on lap 134 for a four-tire pit stop. Unfortunately, he was penalized by NASCAR for being too fast in section one of pit road while entering. The penalty dropped the No. 4 team from fourth all the way back to the 26th position for the restart on lap 140.

The Bakersfield, California, native raced his way back up to the 13th position on lap 215, before the handling went away on the No. 4 and Harvick reported that the car was tight in the center and loose off. He dropped a lap to the leaders on lap 282 and a second lap down on lap 353.

Harvick raced hard the remainder of the race and finished 20th at the checkered flag.

“We were slow all weekend,” said Harvick, who won the Sprint Cup race Martinsville in April 2011. “We could just never get the handle on it.”

Jimmie Johnson won the Goody’s Fast Relief 500 to score his 79th career Sprint Cup victory, his fourth of the season and his ninth at Martinsville.

There were five caution periods for 54 laps, with two drivers failing to finish the 500-lap race around the .526-mile oval.

Harvick and Kurt Busch are representing SHR in this year’s Chase for the NASCAR Sprint Cup, and after Martinsville – the seventh race of the 10-race Chase – they rank sixth and seventh, respectively, in the Round of 8. Harvick leaves Martinsville 16 points behind fourth-place Kyle Busch. Kurt Busch is seventh, 18 points out of the top-four. Following the ninth race of the Chase Nov. 13 at Phoenix International Raceway, only the top four drivers will advance to the final, winner-take-all Championship 4 on Nov. 20 in the season finale at Homestead-Miami Speedway.

The next event on the Sprint Cup schedule is the Nov. 6 AAA Texas 500 at Texas Motor Speedway in Fort Worth. The race starts at 2 p.m. EST with live coverage provided by NBC.