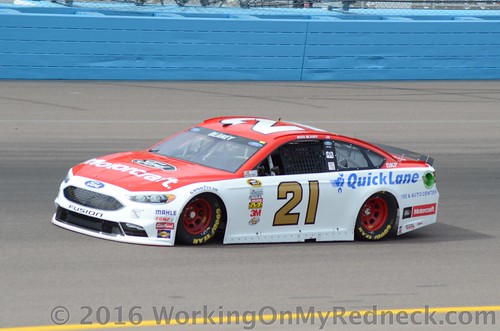 Ryan Blaney and the Motorcraft/Quick Lane team put on a strong performance in the Hellman’s 500 at Talladega Superspeedway. On a day in which Ford Motor Company came away with a big win by Joey Logano and Team Penske, four other Ford Fusion drivers, including Blaney, finished in the top 11.

Ryan had one of his best runs in weeks as he led the 500 on two occasions and was in the runner-up spot for long stretches at a time before finishing 11th. He wound up saving his best performance for the end, when he drove from 21st to 11th on the final lap.

“Passing 10 cars on the last lap is like Earnhardt used to do,” team co-owner Eddie Wood said of Blaney’s last-lap dash. “We knew going into that overtime finish that restarting ninth, it was going to be three- and four-wide and wild.”

“Ryan got shuffled back but did a tremendous job recovering in a short time. He did a great job all day. We were in the top four nearly the entire second half of the race.”

Wood also offered his congratulations to his fellow Ford teammates on the No. 22 team for their Talladega win, which puts them in the Round of Eight in the Chase for the Sprint Cup.

“I was watching them in the closing laps as much as I was Ryan,” Wood said. “I’m happy to see our Ford teammates in Victory Lane.”

Wood said his own team’s strong runs this season are due in large part to its alliance with Team Penske and all the support from Motorcraft/Quick Lane and Ford Performance.

“All year long we’ve had great cars and great equipment,” he said. “They are great people to work with.”

The Motorcraft/Quick Lane over-the-wall crew had another stellar afternoon. NASCAR’s pit road stat sheet shows the No. 21 crew at the top of the standings. On four stops, Blaney was on pit road for a total of just 2 minutes and 22.837 seconds, better than any other team on pit road.

To top it all off, Wood said, was the sight of a Talladega grandstand packed with enthusiastic fans.

“You can always count on Talladega to bring out the kind of crowd we all like to see,” he said.

Blaney and the No. 21 team now head to the Wood Brothers’ home track, Martinsville Speedway for Sunday’s Goody’s 500, where the iconic Ford Fusion will carry the colors of Virginia Tech.