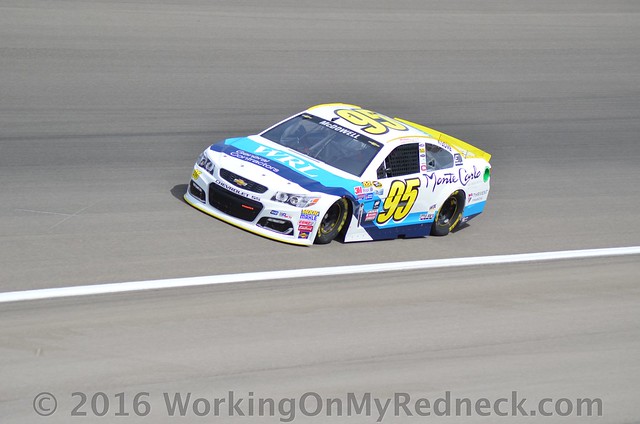 McDowell and CSLFR started off the weekend strong at Talladega Superspeedway, as the team finished the first practice session in the sixth position on the leaderboard while running in the draft and decided not to turn any laps in the second and final practice session.

Although McDowell qualified in the 34th position during single-car qualifying, the team knew they would be able to move up quickly while running in the pack during the race.

At the start of the Hellmann’s 500, McDowell quickly moved up nearly fifteen positions in the first two laps and made it as far as the sixteenth position within the first ten laps.

McDowell reported feeling vibrations in the No. 95 K-LOVE Chevrolet SS due to worn tires before the first fuel window, but the team was able to quickly make their first green flag pit stop for a new set of tires and fuel, before McDowell worked his way back into the Top-15.

During the majority of the second half of the race, McDowell was able to stay in the Top-10, and even ran in the sixth position during the final fifty laps. The team made their final pit stop and was forced to restart 25th with just under ten laps to go. McDowell would eventually work back up into the Top-20 and finish the race in 16th after a few final three and four-wide battles.

Despite feeling under the weather for the weekend’s entirety, McDowell was able to fight his way towards the front of the pack to earn the team’s eighth Top-20 of the 2016 NSCS season.

“I felt fine during the race,” said McDowell. “Obviously we were hoping for more there, but we ran in the Top-10 most of the day. It just didn’t quite work out at the end, but I am glad to have another solid finish. We will move forward and keep working toward our goal.”

Crew Chief Todd Parrott was also satisfied with the team’s solid 16th place run at Talladega, and commends his team on a job well done.

“With a driver that wasn’t feeling well, I was pleased with what happened during the race,” said Parrott. “I think Michael did a great job staying up front and keeping his nose clean all day. During the next to last restart we were in the Top-10 and just got shuffled back a little – that’s just part of restrictor plate racing. After we made our last pit stop, Michael dropped back to 25th and worked his way back up to 11th before the last caution. I think if that last caution had not happened, he would have gained even more spots with the run he had going. All in all it was a good day. Our guys did a great job, and we brought the car home in one piece.”

Next for McDowell and CSLFR is the Goody’s 500 at Martinsville Speedway on Sunday, October 30 where they look to excel at one of McDowell’s favorite tracks to visit.

Formed in 2016, Joe Falk, owner of Circle Sport Racing and Bob and Sharon Leavine, owners of Leavine Family Racing teamed up to compete in the 2016 NASCAR Sprint Cup Series season as Circle Sport-Leavine Family Racing.  The team will field the No. 95 Chevrolet SS, which will be driven by Michael McDowell as well as Ty Dillon in select races.  The team operates out of their Concord, N.C.-based race shop with a veteran group of racing personnel and is driven by several core principals including Value, Integrity, Flexibility, Opportunity, Access and Experience.  For more information, please visit www.CSLFR95.com.