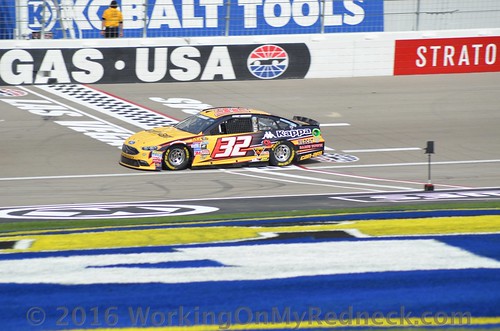 Deep in the NASCAR Sprint Cup garage, well away from the championship contending teams, a race for survival takes place.

Owners seek partners. Others look to sell or buy a charter, the sport’s golden ticket that guarantees a revenue stream and a starting spot in every race.

The movement is taking place because of a performance clause with the charters.

If a chartered team finishes in the bottom three among the 36 chartered teams in the owner standings three consecutive years, NASCAR has the right to remove that charter. Although the first year with this system isn’t yet complete, teams aren’t waiting to act.

“Let’s face it, anybody in the bottom three is exploring all their options right now,’’ car owner Archie St. Hilaire told NBC Sports on Friday at Talladega Superspeedway.

St. Hilaire’s Go Fas Racing team ranks last in the standings among charter teams. He seeks a partnership. He is willing to lease his charter and partner with another chartered team if that will help his team grow.

Falk told NBC Sports that NASCAR viewed his action as leasing the charter. Owners can lease their charter only once in five years. That means Falk must keep his charter and partner with a team without one or sell the charter after this season.

“You’ve got too many sellers and not any buyers, so the price is dropping,’’ Falk said of the charters. “It’s dropped dramatically on what some people have been able to acquire one. Even if (a team has) an investor who is willing to put up the $3-5 million to buy one, it won’t work unless a sponsor comes along.’’

There’s even more movement that could take place. Premium Motorsports leased its charter to HScott Motorsports for the No. 46 team this year. That charter must be returned after this season. Furniture Row Racing is expected to secure a charter for next season for the No. 77 car that will have Erik Jones as a teammate to Martin Truex Jr. The Wood Brothers remain without a charter.

As all that swirls in the sport, St. Hilaire, who said his team has a $5 million budget, knows he must react.

“To really stay out the bottom three I think $10 million is a key number,’’ he said. “We’ve got to get that thing to $10 million to be competitive.’’

The team, which has had seven different drivers this year, has a best finish of 19th by Bobby Labonte at Talladega in May. Labonte is in the car this weekend.

“I need to peak that fun meter a little more,’’ St. Hilaire said. “Thank God I don’t live off this business. I do it for fun, and I’m not having a lot of fun right now,’’ he added with a chuckle.

Even so, St. Hilaire remains committed to the sport and hopeful his team’s performance can improve.

“It’s nothing money can’t fix,’’ he said. “Money buys speed in this business, no doubt about it. We just need an affiliation, which we’re shopping like hell for.’’

St. Hilaire said he hopes to have an idea in the next month what direction he’ll go.

“All options are on the table to make the team better,’’ he said. “We’re going to go racing. I just got to look at how and where.’’

That’s similar to what car owner Tommy Baldwin told NBC Sports this week, saying he was “exploring all my opportunities’’ for the team’s future.

“If you don’t have the money to keep up with the Joneses, you’re going to be left behind,’’ Baldwin said. “If you told me eight years ago when I first started this team I would be pretty much in the same spot as when I started, I would have told you that you were crazy. This sport has taken off so much here as far as how smart we’ve all gotten. It’s not that we don’t know how to do it, it’s just that we don’t have the money to apply the proper resources to do it.’’

Any deal likely will not be finalized until after the season and some might not get done until January, depending on how quickly teams move. Falk notes that he and Leavine decided to partner last December. NASCAR announced the charter system Feb. 9. Falk was granted a charter but Leavine’s team did not qualify. That made their pairing even better for this season.

So why doesn’t Falk sell his charter to Leavine? Falk admits he wants to have some hand in a team, while he said Leavine wants 100 percent control. Falk admits they still might be together next year if a sponsor can be found for a second car.

If not, Falk will be looking for a partner.

“Still something might pop up at (Richard Childress Racing) where they need another car,’’ said Falk, who has been aligned with Childress. “I’ve got a lot of things working. I’ve also got some things you wouldn’t expect. There’s a lot of stuff going on right now.’’

One thing he said he might consider is partnering with Curtis Key of The Motorsports Group, which does not have a charter for the No. 30 car.

“I truly don’t know what I’m going to do,’’ Falk said. “I wish I did. Curtis Key and I are from Chesapeake (Virginia). We’ve known each other our whole life. I don’t really have a problem going over there to help Curtis. We have to have sponsorship.