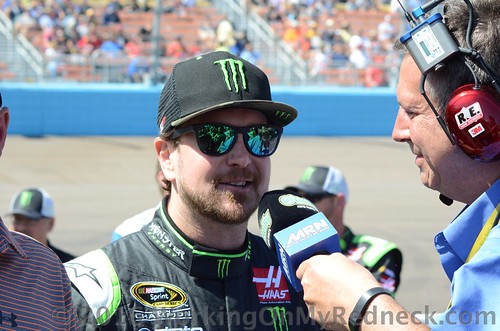 Point Standing: 4,000 points – Advances to the Round of 8 in the Chase for the NASCAR Sprint Cup

Kurt Busch and his No. 41 Haas Automation/Monster Energy Chevrolet team for Stewart-Haas Racing (SHR) were hoping for a relatively uneventful day Sunday at arguably the most unpredictable racetrack on the NASCAR Sprint Cup Series circuit in order to advance to the Round of 8 in the Chase for the Sprint Cup playoffs. When the checkered flag flew after more than 500 miles of racing in the Hellmann’s 500 at Talladega (Ala.) Superspeedway, it was mission accomplished: The No. 41 Chevy crossed the finish line in fourth place, and Busch will continue his drive for a second career Sprint Cup championship.

The 2004 Sprint Cup champion was the highest-qualifying and highest-finishing SHR driver this weekend, starting from the seventh position and maintaining his position at the front of the pack the entire race with a much welcome trouble-free run. He started the weekend sixth in the Chase Round of 12 standings, a somewhat comfortable 17 points ahead of the first cutoff spot of ninth place. A finish of 16th or better in Sunday’s race around the 2.66-mile superspeedway would guarantee his advancement in the playoff.

As it turned out, the outcome was never in doubt as Busch took advantage of a well-handling racecar and a race that was void of the huge, multicar accidents typical at Talladega.

His No. 41 Haas Automation/Monster Energy Chevy was so good that a small air-pressure adjustment to the left-rear tire on his last of four pit stops was the only adjustment made to the racecar all afternoon.

“It was really a fun,” Busch said. “Every time I would make a mistake and get shuffled to the middle, it seemed like the crew guys would bring back a solid pit stop to put us in position and to be in control. It feels good when we have that plus alongside our name in points. I was trying to take it easy for (crew chief) Tony Gibson and all these guys who work so hard. There was some rooting and gouging at the end, and I got some damage. I was shooting for top-15 and we ended up in the top-five, so that is a good day at Talladega as far as we’re concerned. Our car just wanted to go to the front today. This effort today just felt like that total team effort. The pressure is always on us, but we are going to get stronger and better as this Chase goes on. I’m really excited about this restrictor-plate car heading to Daytona next spring.”

Busch’s teammate Kevin Harvick, driver of the No. 4 Jimmy John’s Chevrolet SS for SHR, finished seventh. It was his 24th top-10 this season and his 14th top-10 in 32 career Sprint Cup starts at Talladega.