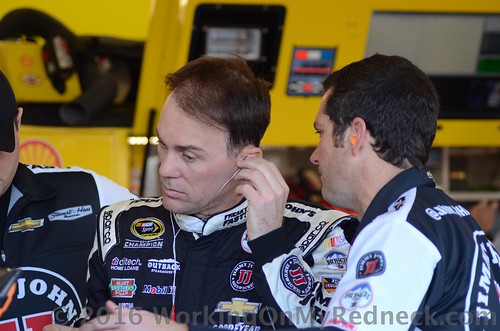 Points: 4,000 points – Advances to Round of 8 in Chase for the NASCAR Sprint Cup

Kevin Harvick, driver of the No. 4 Jimmy John’s Chevrolet SS for Stewart-Haas Racing (SHR), finished seventh in Sunday’s Hellmann’s 500 NASCAR Sprint Cup Series race at Talladega (Ala.) Superspeedway. It was his 24th top-10 finish of 2016 and his 14th top-10 finish at Talladega.

“All in all the Jimmy John’s Chevrolet team did a great job,” said Harvick, who won the Sprint Cup race Talladega in April 2010. “Everybody just got to pushing and shoving, and we finished seventh. That is pretty good for Talladega.”

Harvick started from 22nd place, and rather than just taking the passive approach of laying back and riding, he elected to mix it up, racing into the top-10 within the opening laps. The 2014 Sprint Cup champion quietly logged laps during the first 30 circuits. As the time for pit stops approached he reported that the Jimmy John’s Chevrolet was handling on the loose side when he drove into and through the turns. In addition to four tires and fuel, crew chief Rodney Childers called for a wedge adjustment during the team’s first stop.

As the race continued, the loose-handling issue persisted on the No. 4 Chevy. The team continued to massage the handling on the Jimmy John’s car, and Harvick executed a conservative approach on the track, comfortably running among the top-25 to the halfway point and beyond. It was at lap 125 that the Bakersfield, California, native started to make a play for the front of the field, climbing back into the top-five by lap 130.

Harvick maintained a presence among the top-five as the race drew to a close, climbing as high as second place. The sixth and final caution was displayed for a single-car accident on lap 187, forcing the race into NASCAR’s version of overtime with the first attempt at a green-white-checkered finish. Harvick was in third place, but cars started darting on the final laps and he was shuffled back to seventh place by the time the checkered flag waved.

Harvick’s SHR teammate Kurt Busch, driver of the No. 41 Haas Automation/Monster Energy Chevrolet SS, led the four-car SHR contingent by finishing fourth. It was his eighth top-five this season and his seventh top-five in 32 career Sprint Cup starts at Talladega.

Harvick and Busch came into Talladega as members of the 12-driver Chase for the NASCAR Sprint Cup. Talladega, however, served as an elimination race, with the four lowest Chase drivers not advancing to the Round of 8.